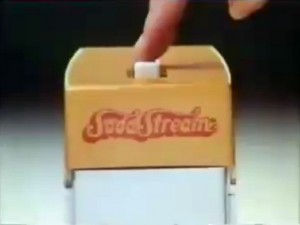 ’Wow! You’ve got a Soda Stream?!’ Surely there was nothing quite like the do-it-yourself fizzy drink-maker (or ‘dispenser’ as they called it) to secure instant kudos with all your mates, and make school lunch-breaks round your house a dead cert.
Everything about the device screamed fun, from the distinctive whirly bottles, those cylinders of gas which were handled by dad with almost undue reverence, as he’d heard down the pub someone once dropped one and blew the roof of his house away, via the extraordinarily gloopy syrup (mmmm, Tizer!), to the fart sounds that emitted from the device when your drink was maxed-out with fizz – who would have thought carbonated water could be such fun? First launched in 1903, the shaker-maker hit critical mass in the 1970s when that ‘get busy’ advertising campaign did the rounds, cajoling people – big or small – to ‘create a fizzy flavour with water from the tap’. Soon own-brand coke, fizzy lime and non-copyright-baiting ‘iron brew’ flowed in abundance, demanding to be supped through one of those hilarious curly drinking-straws. Still in production today, for some reason Soda Stream no longer seems to be quite the party-starter. Who’s to say a later Tony Slattery-helmed advertising campaign wasn’t wholly responsible?