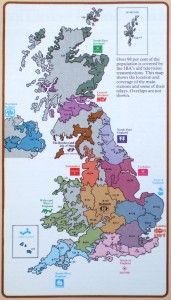 Sadly, with ITV regions practically extinct, the humble local telly ad’s becoming a rare species. The most basic was the still picture plus voiceover, exemplified by the Wigan Market campaign, which in its entirety consisted of a still of said location over which a voice implored ‘come to Wigan Market!’ Every region had these, be they for Yeovil Sheepskin or four-in-one Scottish electrical goods merchants Glens, Hutchinsons, Robertson and Stepek. Slightly more sophisticated ads employed a mascot: the animated lion who declared Don Amott ‘king of caravans’, the old lady who espoused the loveliness of Shackleton’s high seat chairs, or the Superman clone with enormous packet who strode through a furniture store as the jingle proclaimed, ‘when you walk through the door/your pound’s worth more/at Williams… where else?’ Next step up was to rope in someone famous. Manchester’s BOC Cars hired an ermine-clad Bernard Manning (‘we’re the Earls Court of the North!’), while Frank ‘Captain Peacock’ Thornton played a store manager for Welsh furniture shop Arthur Llewellyn Jenkins. Most glamorous of all was Midlands Yugo outlet Swithland Motors, who hired Sam Fox for a series of stilted skits with comical loser Wally, who fainted in awe of Sam’s spoilers, sunroof and trendy white paintjob. If you couldn’t afford a celeb, why not become one yourself? Many local entrepreneurs went before the cameras flogging their wares. In Ulster, it was Crazy Prices’ perpetually terrified Jim Megaw. Colindale Volkswagen was plugged by parachuting proprietor Ray Thacker. The North West was treated to the spectacle of estate agent Owen Oyston falling backwards into a swimming pool. And we’re supposed to be in the middle of the age of ‘make do and mend’ right now? Pah!