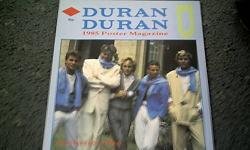 What better way to signpost your devotion to the latest short-lived elaborately-coiffured pop sensation than by forking out three times the cost of an issue of Smash Hits on a huge fold-out poster with some extremely basic biographical details on the reverse? Well that’s what pop fans did in their thousands in the eighties, with each successive gaggle of generally girl-orientated popsters inspiring an ozone layer-depleting amount of said items. The journalistic content, it has to be said, was never of a particularly high standard, but then again neither were the posters themselves, invariably involving some unexciting photo session cast-off that the publishers presumably had to pay less money for. Sometimes you’d get a bizarre short story or comic strip, usually involving John Taylor being kidnapped and held for ransom before an important gig or some ‘Bros In The Haunted Castle’-type comedy shenanigans, and there was always the inevitable ‘Battle Of The Bands’, wherein the posterrific subject would be scored against their nearest rivals and invariably win by a single point. Six months later, both would be replaced by entirely new names as if nothing had happened, and the Postermag juggernaut rolled on and on until [INSERT SOME NONSENSE ABOUT FACELESS DANCE ACTS DESTROYING THE PRECIOUS POP FIRMAMENT HERE]