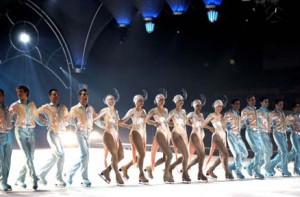 It was launched during the second world war and still goes on in a big chilly shed somewhere in the world, but this never-ending (in all senses) ‘ice spectacular’ will forever be associated in the British mind with that period from the late 1960s to the early 1980s, when it was guaranteed a sizeable chunk of a particularly drab bank holiday afternoon on BBC1, ensuring a mass exodus over to the film of Bless This House on the other side. Initially a feathered homage to Busby Berkeley (but on ice skates), latterly a bunch of people in rubbery costumes falling over a lot (but on ice skates), it’s chiefly remembered, aside from stinking out the schedules, for that ever-increasing ‘let’s all link arms and spin round the rink in a big long line’ climax that was so easily replicable round your local rink. Holiday… didn’t exist in its own sequinned time bubble, however, latching on to flavours of the moment such as Snoopy in 1976 and disco in, er, 1985.