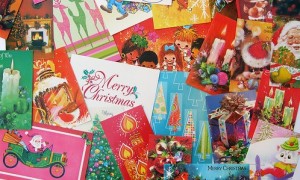 As the school term wound up at the end of the year, teachers across the country looked for some form of activity to keep the kids ‘making and doing’ which wouldn’t result in any take-home work for themselves. Thus was created the tradition of the Christmas card post box, a two-pronged initiative that would not only keep the little bleeders quiet for a couple of afternoons, but also served as handy reinforcement of the most valuable lesson any of us ever learn in school; popularity is all. First came the construction of the device. Generally inspired by similar-themed ‘makes’ on Blue Peter, these were manufactured from a well-known frosted cereal box and decorated with crêpe paper (a material never glimpsed outside the classroom), tinsel and a shit-load of glitter-encrusted Marvin glue. Once built, it would then be placed in the corridor by the fish tank for the whole school to use, awaiting the deposit of greetings cards constructed during school time (another afternoon taken care of, there), or those begrudgingly bought from the charity catalogue. Every morning a grandiosely-titled ‘card monitor’ (read: spoddy kid) would then collect all the envelopes addressed to their class and distribute them to much excitement. Cue kids comparing how many salutations they’d each received, and a harsh but valuable lesson for the odd-smelling ‘seasons greetings’-less child at the back of the room.