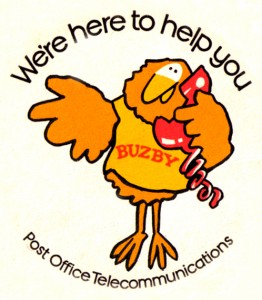 When Bernard Cribbins, the voice of Buzby – a straggly, phone pole-dwelling cartoon canary in personalised vest – phoned his mum to tell her she was on telly, a nationalised industry dipped its toe into the heady world of merchandise. plush toys, stickers, combs, necklaces and badges sprang up. Buses and Commer vans carried his image everywhere. Buzby’s adventures appeared in TV Comic and picture books detailing his laddish antics (‘Buzby’s Rock Group‘, ‘Buzby’s Girlfriend’). There was even an abortive attempt to privatise the company with the issue of ‘Buzby Bonds’. It all got a bit much, and he was eventually replaced with the less omnipresent (though more annoying) ‘It’s for you-hoo!’ campaign.