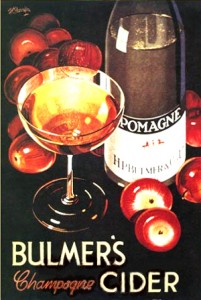 Nowadays even the Daily Star has a resident wineologist , but until relatively recently the majority of British folk existed in a wine-free world, weddings and Christmases excepted. The holy trinity of Blue Nun, Black Tower and table-lamp-in-waiting favourite Mateus were as posh as it got, but slightly further downmarket were the British wines, or ‘wine-style drinks’ as they were often known, brewed in the UK from – shock horror – imported grape concentrate. Perhaps feeling slightly guilty over this deception, marketing departments poured on the terribly English heritage. Rougemont Castle advertised itself with that old standby, a suit of armour. Country Manor cooked up possibly the worst slogan ever written: ‘So light. So subtle. So buy some’. Playing to a slightly more continentally aware crowd, Concorde promised a bottleful of fun for under a pound. At rock bottom, however, was the grape-free plastic-corked sparkling concoction known as Pomagne, the nine percent proof prize in many a ‘spin the arrow’ local fete tombola which inspired countless teenagers to re-examine their breakfast.