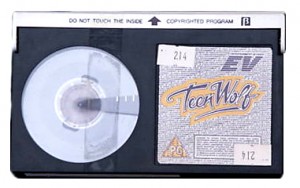 Of course, the picture’s better on Betamax – so claimed home hi-fi nutters in the mid-1980s unwilling to admit the entertainment system they’d spent hundreds on was minutes away from becoming obsolete. Sony’s also-ran of the video age launched in the UK in 1978, but had been plugging away in the US since 1975. A year later JVC had joined the fray with its VHS format and while Sony was slow to bring other manufacturers on board, the newcomer quickly jumped into bed with various Japanese electronic firms. Soon VHS was everywhere. Even though Beta led the way in innovations (it’s the system that brought us fast-forward and rewind!), VHS’s ubiquity and the tapes’ greater recording capacity swayed the public. By 1988, Sony threw in the towel, and got ready to launch their own VHS recorders.