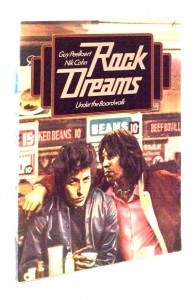 We normally treat the phrase “of its time” with the contempt such a corny, the-pubs-are-open cliche deserves, but for this collection of airbrushed rock ‘n’ roll “fan-tasies”, no other words will suffice. After all, how much more 1973 do you get than Guy Peellaert’s ragbag collection of spray-on doctored pics of the Stones, Beatles and, er, Cilla nicked from the pages of the Sunday Times and Playboy? None more 1973, fortunately.

Music scribe Nik Cohn lards the captions with the sort of rock journalese that makes the jacket blurb for Jeffrey Archer’s latest look like an elegant arrangement of finely-wrought aphorisms. But no-one’s looking at the words, they’re concentrating on the grainy, smeary, luridly-coloured pix. And just as future generations will look at the Photoshopped monstrosities of today and wonder just what percentage of the population had access to the gift of sight, so the modern reader of this bizarrely popular coffee table kaleidoscope might be excused for wondering whether everyone back then had to spend a year with their eyes shut for tax purposes.

Artistically it’s a pile of reconstituted crap. But what zany reconstituted crap it is! Sometimes the level of imagination undercuts your average News of the World sub-editor. Here’s a picture of the Drifters… under a boardwalk! A-and look, here are The Chairmen of the Board, chairing a… and so on. But where it’s not ludicrously vapid, it’s vapidly ludicrous. The Stones in bondage tranny gear, with Mick reclining as if to the manner born and Charlie looking hilariously uncomfortable in his buckle-down catsuit, is actually pretty funny. Turn the page, and there they are again, in full-on SS garb, teaching a gang of naked pre-pubescent girls to play the piano. Oh dear, 1973. And the nude spread of Mama Cass and Michelle Phillips in the full lotus position we’ll gloss over completely, if you don’t mind.

In its defence, you could say this is a fairly honest depiction of the sort of solemnly silly stuff that goes through the mind of your average hormone-addled pop fan: corny and prurient at the same time. The untamed passion of the unhinged pranny. But the effect is disturbing, with the initial sniggering giving way to a kind of sad embarrassment by proxy, like stumbling across the secret diary of an especially extreme David Bowie fan. (And how bizarre that the Dame gets only a page toward the end of the book, while full double spreads are lavished on the likes of Ruben and the Jets.)

Still, a million customers can’t be that wrong, and this much-reprinted volume did at least have one enduring legacy beyond the walls of student flats worldwide: the opening reproduction of a newspaper Sinatra story headlined “Frankie Goes to Hollywood” was returned to pop culture over a decade later by one H Johnson. Now there’s a musical era we’d love to see immortalised in a coffee table fan-art tome. Using Teletext graphics, of course.