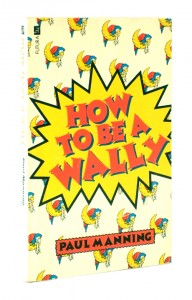 Of all the great pretend sociological toilet books the eighties (literally) threw up, actually funny titles were few and far between. (Next time you’re pottering about the local Mencap, have a flick through The Sloane Ranger Handbook. Spot any jokes? Exactly.) Of the few that had any substance to them, Paul Manning’s study of lower middle class social prattishness led the pack.

As (cough) TV Cream’s new book exclusively reveals, this sort of coarse gaucherie has a long literary tradition going back to ancient Greece, but Manning’s Wally is both timeless and of the moment. His is a world of Ford Cortinas, C&A trainers, CB radios, saying ‘this is it’ instead of ‘I agree’ and standing outside DER showrooms in the pouring rain watching Game for a Laugh. It’s brand name comedy in the days before it went stale, and it remains infinitely more evocative of its era than a million clips of Brian Hanrahan in a flack jacket boasting about how many planes he can count.

A sequel, Superwally, followed in due course, after which Manning decided we’d got the idea and moved on to other things. Ah, if only today’s novelty book authors would show such restraint, eh?