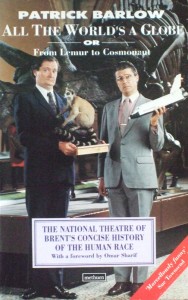 Friends, we are gathered together, in this here place, to praise Desmond Olivier Dingle, renowned classical actor, thinker and Artistic Director of the National Theatre of Brent, a two-man subsidised acting troupe given to mounting threadbare reconstructions of mighty moments from world history in childishly pretentious – to say nothing of factually mangled – productions. Patrick Barlow, the man behind Dingle (‘as it happens’), has taken the NToB, aided by a string of long-suffering ‘assistants’ (including Jim Broadbent, Robert Austin and John Ramm), from fringe performances to radio, television and the real National Theatre, all the while keeping up the chasm between their vaulting ambition and paucity of talent.

The same applies to their print excursion, which attempts to do exactly what the title attempts to say. Dingle is the master (or so he likes to think) of the grand manner. After a foreword (of sorts) from Omar Sharif come no less than three prefaces in which Dingle pays tribute to his publisher ‘Sir Geoffrey Methuen’, and humbly pledges to ’take up my pen, and bend myself before this mighty task to tell the history of the whole Universe from before it was begun to the present.’ There’s historical learning in abundance (‘The Romans wore long white bath-towels, covering everything, fortunately […] Unlike the Greeks, however, the Romans were Italian’), and a handy list of related activities (‘Things to do: Make a scale model of a rotating crop’).

The inspiration clearly comes from 1066 and All That, but unlike the cavalcade of re-imaginings of that seminal schoolboy error, Barlow injects a sense of pathos into the maelstrom of over-eager academic cluelessness. From his bedroom in Dollis Hill, Dingle beavers heroically away at his magnum opus with the naïve industry of the true dunce scholar, tempered only occasionally by the mounting frustration of the undiscovered genius. As Dingle himself puts it, ‘I am clearly an author of potentially massive proportions’. In this case, academia’s loss is the lavatory’s gain.