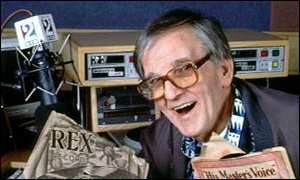 … He said it after playing Orville’s Song on Pick Of The Pops. Yes, Alan Freeman, music lovers. Whether you adored him for his unquenchable desire for rock music on a darkened backdrop of a Saturday night closedown greasefest, or for his workaholically-intricate and supremely entertaining chart rundowns of yore, you adored him. Fluff had no enemies. If you didn’t want to listen, fine. But it wasn’t for DJ reasons, which could be thrown at every other person ever shunned by a radio listener as he or she prepared to air the wax.

The tentative relationship between the UK and Australia always dissipates when Australia’s most excitable and influential adopted Briton comes to the fore. Along with Rolf Harris, Fluff disproved the long adage that Aussies have huge egos, considerable superiority complexes over the Poms and a shameless lack of culture. But this guy wanted to be an opera singer. When he couldn’t cut it on the warble, he turned to playing other people’s efforts and, once he’d established that the fledgling disc jockey business had a gap to fill, he duly left no space whatsoever.

Fluff invented so much which radio DJs of all shades take for granted today. He invented catchphrase, and was the only jock with the integrity and public affection who could take catchphrase into the minimalistic, serious era of radio record playing after Harry Enfield had blown his peers out of the studio. “Pop pickers”, “not arf” et al – who ever dared take the piss? Nobody. Especially not those who watched him work, as even among the fiercer elements of envious power struggles which all broadcasting establishments hoard, Fluff was foeless.

He also invented the tease, a principle in radio which programme controllers tirelessly drum into their charges to this day. Tell everyone what’s coming up, but don’t tell them too much. Just a bit. Keep them hanging on. Make sure you get into the next half hour of the RAJAR diary as a result. That last bit is the modern take on a style Fluff incorporated naturally into his patter. Fluff teased like hell on Pick of the Pops (“on this countdown we can promise you gems from the Beach Boys, Desmond Dekker, Amen Corner and Elvis, but first, climbing well to number 19, pop pickers…”) and was also equally as generous with his expectant audience at rock time.

Bits of easily identifiable classical music prior to the opening bars of At The Sign Of The Swinging Cymbal, and uses of the “Remember then, then, then then, theeeeen!” harmonies immediately before a new countdown was to begin, all labelled him as a thinker and innovator. This was no show, no bloke puffing fags while letting the records do the work. It was graft, and in the days before Myriad and Dalet, RCS and Enco, he was pressing buttons constantly for vinyl, cartridges, reel-to-reel and DAT to make sure everything got played in the right order and on a slickness level which few jocks have ever usurped. And in the days when you bashed in a password and the mixing desk changed to your own personal settings, he was often finding buttons at the opposite end of his reach.

Fluff found his place in Oz before embarking on a holiday to the UK in 1960 from which he would never return. Radio Luxembourg gave him the tools to hone his craft, then he joined the BBC where he developed the Pick Of The Pops format and invented the now seemingly simple idea of hosting the chart show backwards, so that people would stay right until the end to find out what was at the top of the hit parade.

Later he would become one of the star turns on the exciting new sound of Radio 1, maintaining a daytime presence in place of Terry Wogan, though it’s hard for people born during this time – like me – to imagine Fluff on a playlist, with a format, doing prep and taking advice from producers. No doubt he did it, but the weekdays weren’t where he belonged. He was, however, the first ever roadshow presenter, and was also on the roster for Top Of The Pops (“so pop pickers, it’s Massachusetts, from the Bee Gees!”) while extolling the metal ambitions of Sabbath and the progressive ires of Genesis at the weekend. Capital Radio took him on in 1979, where he revived Pick Of The Pops, before his much-welcome 1988 return to Radio 1 for both of his unflinching, timeless weekend formats. He close Radio 1 down on a Saturday for the last time prior to the 24-hour shift; he added to hiss Sunday zeal when, after Pick Of The Pops, he hung around to aid the fledgling Chris Evans with his Fluff On Your Record feature.

Fluff wasn’t Bannisterised, but he was given the opportunity to phase himself out. With Baker and Freud on the scene now, clearly Pick Of The Pops didn’t belong, and he quit the show in 1992, staying on for the more approachable rock format for a further 12 months. By now, he had embraced the Smashie and Nicey characters, the same ones which had contributed so much to bumping off DLT and Bob Harris, and this added to his cult status further. The rivals couldn’t wait to employ him. He went to Capital Gold, then to Virgin, where he revived the rock show, he presented classical music on various formats and finally, and rightly, brought Pick Of The Pops back to a national audience with Radio 2, consenting to the format’s continuation under a blatantly pre-recorded Dale Winton when he made his decision to retire. And even the new, hip, we-disassociate-ourselves-with-our-past-so-much Radio 1 saw fit to ask the Propellerheads to update At The Sign Of The Swinging Cymbal in order to re-introduce it as the chart countdown music for Wes Butters and later JK and Joel to talk over. It’s still the only chart bed that counts.

Fluff appeared on John Peel’s This Is Your Life tribute, at which point the subject told the masses that if we have to discern between broadcasters and disc jockeys, then Fluff was still the greatest DJ that had ever lived. Peel was, of course, right. Something about Fluff’s shtick never became cheesy, old-fashioned or cliched, because the memory of when it was hip and influential was just too strong. He knew of his power but remained entirely humble for it, balking when at Radio 2, the likes of Alex Lester – himself no shrinking violet in terms of on-air influence and success – would faux-bow and claim “broadcasting legend in the corridor” to anyone within earshot. Specks of Fluff can be heard in the latter era’s better radio presenters – Kevin Greening, Scott Mills, Neil Fox, Simon Hirst, Daryl Denham – and nobody in the industry could find fault with him.

The fact that he sent himself up mercilessly on programmes like The Young Ones (“I’m God. You wouldn’t expect me to be a woman now, would you?”) and, of course, in the DJ retirement home visited by Messrs. Smash and Nice, with Fluff on a Zimmer, helped enormously. At the BRITS one year, he collected the Rock Act award on Nirvana’s behalf and pleaded for radio stations to play more rock music on the air, with Enfield and Whitehouse yelling “hear hear” next to him. His dignity about his role compared to those of the artists he played (“I’m a great believer in the fact that each record has its own value. Because you’ve got the freedom of the airwaves, it’s easy to be a smartarse. But if you can’t say something nice, why say something just for effect? You’re dealing with people’s livelihoods here”) and his total lack of botherment about his private life (including his bisexuality revelation, almost as a side issue, in front of Richard and Judy) all added to the Fluff legend. And I liked him that bit more when, as a wannabe 16 year old DJ, I sent letters to every jock on One FM asking for advice and a photo. Some sent nothing (Wright, Goodier, Bates), some sent the photo (Mayo, Brambles, Davies, King) only Fluff sent both. His advice was to keep working hard, and “stay bright!”.

At the Sony Awards a few years ago, the retired, arthritic Fluff made a rare public appearance to pick up his Lifetime Achievement Award. Afterwards, the queue of underpaid local radio presenters – guys with a sixth of his talent and six-fold of self-importance – stretched across the arena as they asked the frail but great man to pose for photos. Fluff duly did, for everybody. He was the star turn within an industry which had become very cynical, very reliant on flogging business than developing personality, and yet even some programme controllers could only look at Fluff and remember their own childhoods next to the wireless as he told all of the great new single by Martha and the Vandellas.

Unlike Peel, who had seemingly years left as both broadcaster and man, the death of Fluff in an EABF home wasn’t exactly unexpected. But radio will remain alive forever thanks to the enormous archive of Alan Freeman which exists, proving that, above all the politics, pressure and catfighting, that playing records and enjoying it is fun. He did fun on the air like nobody ever could. Alright?