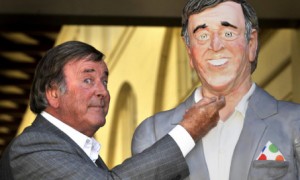 As the Radio 2 family for the next decade continues to gather, and Old Father Tel begins the slow task of clearing his desk of assorted tins of chicken soup and sets of dentures belonging to various DGs, a question swims idly into view: what did TV Cream predict a few years ago by way its fantasy Radio 2 schedule of the future?

We’re not sure but we think we compiled this list in early 2007. It was certainly a long time before what the Guardian desperately tried (and failed) to popularise as ‘Sachsgate’, and before the death of Tony Wilson, who we pencilled in for a show every Saturday evening at 9pm. We also only managed to get as far as completing the weekend.

It was already clear in our minds, however, that there was to be no place for Sarah Kennedy on the next incarnation of the station – and, prophetically, that Wogan would no longer be found on weekdays and would instead enjoy a cosy berth amidst the verdant climes of a Sunday morning.

If memory serves, we envisaged the Waterman and Wilson shows being pretty much the same: the host talking about himself and his favourite records, with the occasional relevant special guest (Rick Astley on the one hand, Vini Reilly on the other – or better still, both together). Wendy Lloyd was probably picked because we realised we needed another woman on the network. The format for Bates Around the World is lost in time. Was it to be Simes pitching the audio tentpoles of his gossip network in a different place on the planet each week? A natter with members of the armed forces in various conflict zones across the globe? Or merely a suitably pompous moniker for a man who went round the world the wrong way in 1989?

Here’s where we felt Terry belonged, and where he should end up next year, although he keeps talking about doing it in front of a live audience, which doesn’t sound right for a Wogan radio show. At 1pm, someone who actually knows a bit about musical theatre instead of someone who just swans on to the Palladium stage in a big frock once a year to sing the same set of waspish Tim Rice lyrics. Bates is back for two hours of hits and headlines, followed by something that seems to have disappeared inexplicably from all national radio stations: a request show. Plus, after 60 years in the business it’s a well-earned promotion for David Jacobs from one hour…to two!