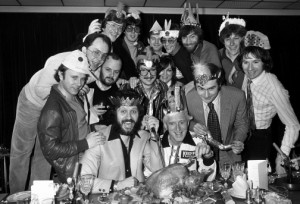 Once upon a time, nowhere was the notion of the “family of BBC faces” more played up at Christmas time than on that wholly non-visual medium of Radio 1.

Every year all the station’s premier personnel (premier not necessarily, as has often been the case, equalling popular) made it their business to lend their pipes to the airwaves on 25th December. To almost universal indifference.

Still, the Christmas Day line-up would always be a telling snapshot of who was up, who was down, and who owed Simon Bates a favour.

In 1981, for instance, Tony Blackburn was still being palmed off with the early morning show for kids from Great Ormond Street hospital, while DLT held court at lunch wielding the knife, or more accurately a knife sound effect, at the DJ Christmas Dinner.

But by 1983 Tone was gone. Change was in the air, with talk of a fresh new station led by a bold, exciting, forward-looking phalanx of DJs…such as “me, Mark Page”. Mike Read took over from DLT at the top of the dinner table, and Steve Wright began turning up while you were washing the pots.

1984, though, marked the beginning of a true Christmas institution. Not Noel up the Telecom tower, but something just as ubiquitous. Simon Bates’s All Gold featured back to back “discs which have gone gold” continually interrupted by lots of gossip and tittle-tattle, plus messages to and from servicemen around the world like it was Two-Way Family Favourites. And, presumably, special appearances from the likes of the BBC Director-General and Denise La Salle.

Things got a little out of hand in 1985, with the likes of Paul Jordan and Adrian John comforting those alone on 25th December, along with a recital by the choirboy of the year and Around The World In 80 Plays (anecdote-rich number-crunching from Gambo, John Walters and Mike Read).

This was easily surpassed in titular triviality by 1986’s P And V’s Christmas Party, starring the Ranking Miss P and Robbie Vincent, although this was ditched the following year for the pedantically-titled Friday Rock Show. It’s not Friday, it’s Christmas Day, dammit! 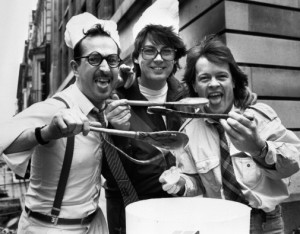 It was always likely that Bates would one day end up spending Christmas Day broadcasting “live” from the Gulf. Why this happened in 1988, however, when nothing whatsoever was happening in that part of the world, is a fine tribute to the man’s ability to marshal BBC resources as if he were running NATO.

Back home it was Liz’n’Mark’s turn on the early shift, followed later by Read And Wright’s Christmas Dinner (do you see?).

This inevitable scatological conceit was promptly scrapped in 1989 for the much more diplomatic Christmas Dinner With The DJs, although Wright, naturally, insisted on his own look-in at 4pm, followed later by Richard Skinner rummaging in his CD Christmas Box.

Chris Morris handing over to Jenny Costello on the nation’s favourite on Christmas Day? It happened, though seeing as nobody was listening nobody noticed – sentiments which could equally be applied to 1990’s DJs Christmas Dinner, rent asunder by a TOTP simulcast during the lemon sorbet.

Perhaps in an attempt to pep up the format, 1991’s beanfeast went on the road. To the studio next door, that is, where DLT carved up a few old birds – “and some turkeys too!” – at the Grey Gables restaurant in Ambridge.

12 months later, however, and this time the feasting was being done live from Great Ormond Street where – naturally – Bates was in residence, having taken over the entire premises to dispense presents and counselling in equal measure no doubt involving both the BBC Chairman and Charles and Eddie.

1992 was Simes’s last great stand, with his medical malpractice preceded by four hours of Bates Solid Gold. Fast forward one year and he was reduced to fulfilling a typically selfless redundancy package by helming a show called Simon Bates’s Whitney Houston Gospel Special. 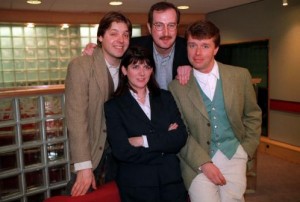 1993 also found Simon Mayo in charge of the Christmas Lunch, Lynn Parsons doing the breakfast show, a John Walters review of the year and the Take That Christmas Take Away.

Change was once again in the air, with talk of a fresh new station led by a bold, exciting, forward-looking phalanx of DJs…such as Clive Warren, piloting the breakfast show in 1994, followed by Steve Wright And The Posse Stars With Presents.

At least there was Simon Mayo’s Christmas Years to enjoy before a grisly line-up of Brookes, Kershaw and Lisa I’Anson.

And so to 1995, with the revolution complete. Chris Evans sat atop the day, handing over to Mayo before Danny Baker’s Reeling In The Years: a highbrow concept that flopped immediately, like everything else on Radio 1 in this year. Talking of which, the Radio Tip Top Christmas Cracker ensured nobody was still around to hear the Evening Session Rewind and then Mark Tonderai telling everyone to go to bed.

Meanwhile in a dusty postroom somewhere on the other side of the world a pile of servicemen’s letters was sitting, unopened, unread…