Excitingly, the Beeb has just published its draft guidelines for covering the 2010 general election. Disappointingly, they don’t contain any information about election night itself.

So what do we already know about how the two main networks are reporting this year’s results – and what, more importantly, can we idly speculate in lieu of actual facts?

BBC1
Anchor: DAVID DIMBLEBY
He already “can’t wait” for the leader debates, and this will be his eighth general election manning the bunker: surely a record that will never be matched. But it’s probably his last, unless we get a hung parliament and there has to be another poll in the autumn because, in the words of David Butler, there are only two weeks worth of coal left in the country.
Humble Spear-Carrier: JEREMY PAXMAN
He’s done the support act in 1997 (“Are you ready to drink hemlock Mr Portillo?”), 2001 (“Look! The pound’s still here!”) and 2005 (“Don’t try and threaten me Mr Galloway, PLEASE”). He won’t be relinquishing his interrogation pod just yet.
Box Of Tricks: JEREMY VINE
It won’t be pleasant, but the Mr Magorium of psephology will be back. The fact he’d toned it down somewhat for last year’s local elections (he was wearing a jacket) is a little reassuring.
A Woman: FIONA BRUCE
She’ll be reading the news. And doing NOTHING ELSE.
Taking A Sideways Look: DARA O’BRIAIN
He’ll be bringing you “the most amusing Tweets of the night”.
Doing An Inaudible OB From A Pub Supposedly Full Of A Cross-Section Of Voters: EMILY MAITLIS
She’ll be joined by three people monitoring “the blogosphere” and will appeal for, but fail to read out, viewers’ emails and text messages.
PLUS
The cast of Outnumbered doing a live improvisation reacting to the results as they come in.

ITV
Anchor: ALASTAIR STEWART
The grumpiest newscaster on British television will be reprising the job he did for the US presidential election in 2008, thereby ending Jonathan Dimbleby’s tenure that began in 1997. At least Old Ma Dimbleby won’t have to worry which son to tune in for.
Humble Spear-Carrier: TBA
Not sure who this would be, frankly. Who does the big interviews for commercial television these days? Mark Austin? Tom Thumb, the political editor? Sandy Gall?
Box Of Tricks: Alastair did these last time round, and a right rubbish job he made of it too. This year somebody like Ben Shepherd will probably get the gig.
A Woman: JULIE ETCHINGHAM
She’ll be reading the news. And doing NOTHING ELSE.
Taking A Sideways Look: HARRY HILL
He’ll be repeatedly interrupting amusing clips from the campaign to pretend he’s having a poorly-aeriated unfunny conversation with the footage, like Adrian Juste crossed with Arthur Askey.
Doing An Inaudible OB From A Pub Supposedly Full Of A Cross-Section Of Voters: PIERS MORGAN
He’ll be cutting into other people’s comments to air his own obsessions and refer endlessly to his own wretched programmes, before telling a member of the public who deigns to answer back that “if they like Russia so much, why don’t you go and live there.”
PLUS
Some of the Loose Women will be in the studio, cooing, cackling and cawing in their calico-knickered voices at the events of the night, paying particular attention to the fashion sense of Sarah Brown and Samantha Cameron. “Listen, love, I’m sorry, but those tights are SO 1997”. 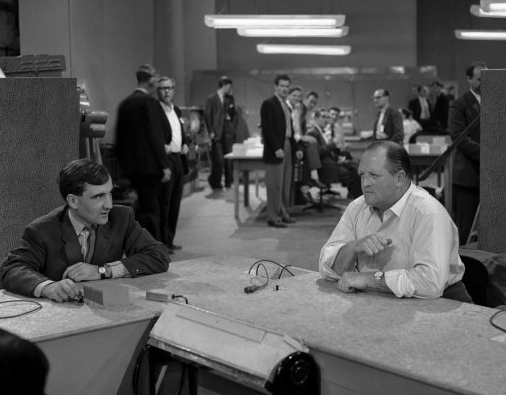