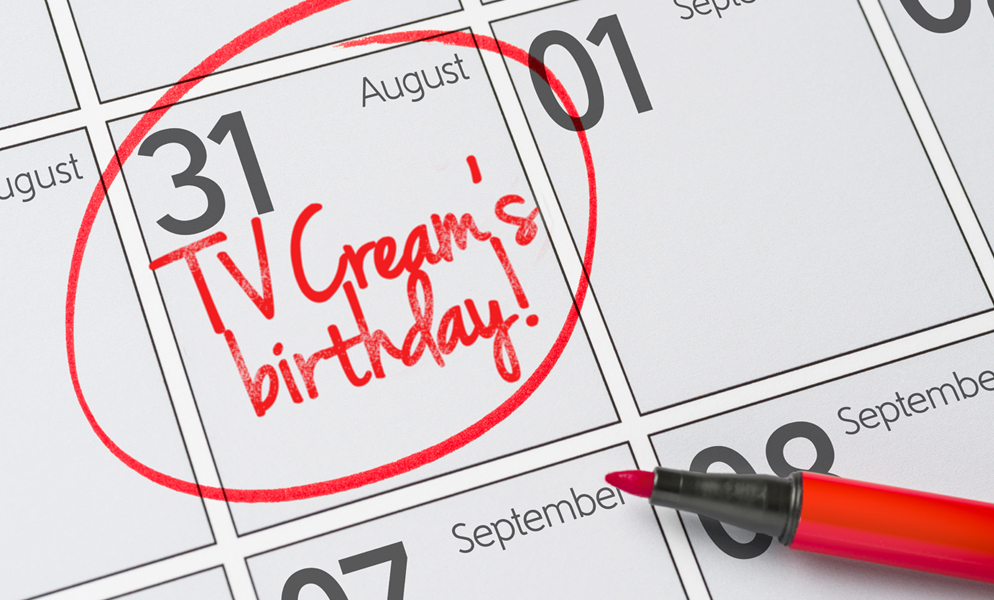 Today’s our birthday! 20 years of TV Cream, who’d have believed it? To get our celebrations underway (there’s more to come), here’s a look at 10 notable TV moments from this day in The Schedules of Yore.

1978: The introduction to Are You Being Properly Served?, highlights from an Edinburgh Television Festival debate on comedy’s social standing, is enlivened when someone in BBC2 continuity presses a wrong button and nearly catches out Donald MacCormick. We’re promised “a bit of music” to fill, which turns out to be the misdirecting first part of the opening titles. When it actually gets going check what this one-off show chooses to use, for no apparent reason, as its title music.

1979: The story behind Kate Bush’s Tour Of Life is well told – a stage spectacle of dance, mime and magic necessitating the invention of the headset mike and which, coupled with the death in a fall of the lighting engineer on the opening night, put Bush off anything but one-offs for the next 25 years. Three months after it finished a Nationwide special told the story of its development. If nothing else it’s worth a look for the Nationwide titles of the time, starring undisciplined children and involuntarily boozing sheep.

1980: Des Lynam’s subsequent cultivation of a Peter-Bowles-for-the-Premier-League-era persona makes it easy to forget that he started off as a commentator – in fact he’d been BBC radio’s boxing correspondent – and did sixteen games for Match Of The Day between 1979 and 1981. Here he is covering his local team Brighton’s defeat against West Bromwich Albion. A short shirt sleeved Jimmy Hill gives away that this is the first season in a short spell where as a compromise after LWT’s attempted Grade-led Snatch Of The Day two years earlier ITV were taking Saturday nights for highlights and BBC moving to Sunday afternoons for alternate seasons. When the contract ended in 1983 Central head of sport Gary Newbon averred “we don’t want Saturday night football ever again on ITV”. Would that it were.

1982: It’s the childrens’ slot in late summer 1982 so of course the Mary Rose is featured, but that’s for the future. For now, Newsround reports on a playground for handicapped children in Chelsea threatened with closure – the land was bought out privately the following year and is now said to be among the most expensive properties in London, of course – plus an arson attempt in Sherwood Forest’s Major Oak as the light closing story. Noisy trailer for We Are The Champions afterwards too.

1983: You couldn’t move in 1983 for the ironically non-moving, or at least in not a normal human fashion, boiler suited robotic mimes Tik & Tok. Somehow they look even less normal with their headgear removed, as on The Show Me Show where John Craven and Maggie Philbin seem a lot more enthused about their act then the audience do and Tik, or maybe Tok, it’s not clear which is which, appears distasteful of robotic dancing taking off in discos.

1986: The autumn season began slightly too early with new series of Howard’s Way and Only Fools And Horses (From Prussia With Love, the one where Del attempts to get Boycie and Marlene to adopt a stranger’s baby) and the start of The Monocled Mutineer. Before any of those, the start of series three of Ever Decreasing Circles, now removed from its “Ricky Gervais likes it!” yoke to stand alone as Esmonde and Larbey’s true melancholic gem. Over on ITV all evening, For Your Eyes Only.

1988: The story goes that Frank Sinatra toured Australia in 1974 and was so insulting cancellations and industrial action followed. He vowed never to return, until persuaded otherwise fourteen years on by a millionaire who was opening a new resort. Sounds like a setup for a wry Clive James documentary? The organiser presumably thought the same, so invited Clive to host the event anyway. Clive James Finally Meets Frank Sinatra ensued, a documentary which, James would later claim, had so little actual footage some had to be run twice, the second time backwards.

1990: Children’s BBC’s morning outpost But First This reached its end for another summer, Peters, Parkin, Forrester and Claudia Simon following Defenders Of The Earth, Hartbeat, a Double Dare special – Pip’n’Saz vs Sonia and one of Brother Beyond – and the Playbus Roundabout Stop with some light out-takes, the highlight being Simon Parkin doing what we all have wanted to do at some point and annoy Andi Peters. To close, proof we don’t see enough comedic credits reading these days.

1991: Nicam stereo broadcasting was a great obsession of TV in the early 90s, getting its own onscreen DOG for a short while, and as this BBC2 trail reveals it was officially launched on this date. Near Instantaneous Companded Audio Multiplex, if you must know, and it lasted about a decade before the digital era-aided switch to DVB-T.

1992: Happy 25th birthday, TV Hell! We’ll be covering the golden age of BBC2 theme nights in their own feature in the near future, so for the meantime let’s just watch the high concept links.