A bit like the way Paul Merton always said the same joyless lines to introduce every single edition of Room 101, once again we feel compelled to remind you that TV Cream is in the middle of running its biggest competition yet: a puzzle trail set in Television Centre to find a mysterious valuable object. 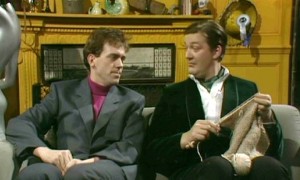 Here is a shot from a sketch in the second series of A Bit of Fry and Laurie.

Assuming the four series of A Bit of Fry and Laurie are numbered 1, 2, 3 and 4, and the episodes labelled A, B, C and so on in order of transmission, today’s square has the grid reference that matches the episode in which the sketch featured in this photo was broadcast.

For example, if it appeared in the first show of the second series (which it doesn’t), the square you’d cross off the map would be A2 (A = first episode, 2 = second series).

Clue to the clue: it’s from the episode that has “a Paul Eddington in it”.

Now you’ll have to forgive us but we must dash – our wife’s just been towed away.