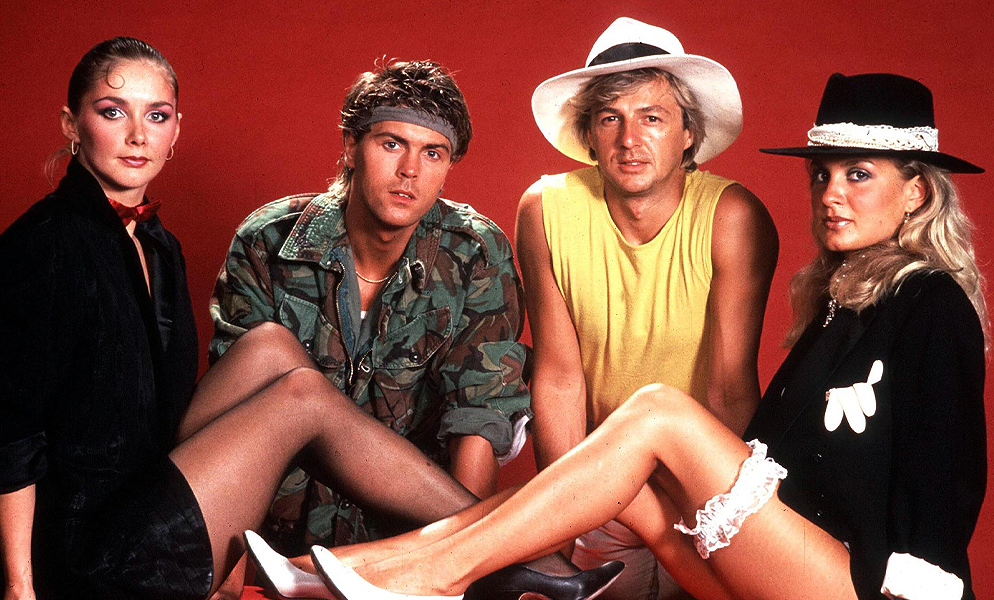 This week’s TV Cream Stays Indoors podcast features old pals Graham, Chris and Ian rewatching Trouble at the Top: Bucks Fizz: Making Your Mind Up and then having a chat about it, which we hope you’ll find very “conjugal, as they say”. In the process, the trio all declared their genuine love for the Fizz, and thus have come together to present their five (each) favourite tracks from the band’s mighty fizzography…

Three singles in and the school-bus singalongs have been ditched in favour of wine-bar guitars, smooth harmonies and sophisticated themes. Even in the opening line, Bobby’s lighting up a cigarette! The best bit is at 3:38, where the two choruses crash into one another. For bonus “feels”, seek out the lovely Spanish version, Noches Sin Ti. – Chris

Breezy pop was always a Bucks Fizz forte, and this is the sort of finely-tuned rave-up with which they could have won Eurovision a second time, had the rules allowed it (which they should have done). The shimmering vocals tell a heady tale of regret mixed with bravado: someone’s put the Fizz in a tizz. But when the verse hits the chorus, it’s the musical equivalent of lifting your head and facing the world again. As the song ends with a final cry of “another night!”, you picture the group freezing mid-routine, arms jubilantly aloft. – Ian

It feels like the perfect Christmas number one, even if it didn’t quite get there in time. A peerless pop fairytale, The Land of Make Believe is built around a masterful production that effortlessly builds and rises towards the final chorus. For the definitive performance, see the original TOTP appearance, featuring Jay as a saucy Lady Di and Bobby as Captain Kidd, whose vest was clearly in the wash that day. – Chris

Trouble is brewing on the quiet streets of Bucksfizzshire. Someone is on the prowl with two things on their mind: larceny and funky bass. “You think that you’re well wired,” grooves our anti-hero. “Me, I’m getting VERY tired.” But the girls fight back: it “wasn’t really all that hard”, they crow, to steal “your sad heart”. A riotous tug of harmony ensues, over a beat that sounds like a getaway car repeatedly trying and failing to start. It is possible this song led directly to the creation of Neighbourhood Watch. – Ian

A school leavers’ disco classic; a classy change of gear on the second album; a moment for Mike Nolan to pop himself onto a chrome stool centre stage, and – according to Bob Stanley – “home counties, potting-shed balladry of the highest order”. Now Those Days Are Gone is all of the above, and also an exercise in technical excellence. You wouldn’t hear vocals this tight again until the Balfour Chorus. – Graham

Bucks Fizz evolved faster and further in the space of 12 months than most bands manage in an entire career. Coming just one year after Making Your Mind Up, this song elevated them into the first eleven of pop: a rich confection of gutsy rhythms and dazzling harmonies, see-sawing effortlessly between pomp and charm. The 20-second breakdown, when everything splinters into a cascade of synth stabs, drum rattles and yelps, is one of the most exciting moments of the 1980s. If Trevor Horn wasn’t jealous, he should have been. – Ian

An epic pop melodrama, If You Can’t Stand The Heat heralded a new “raunchy” era for the band, with grinding choreography and a set of costumes clearly designed to warn Tight Fit off their turf. Not even a shambolic encounter with Simon Bates on BBC1 on Christmas morning (“Everyone knows you, but no-one knows who is who”) could stop it reaching the top 10. – Chris

You want New Wave? Here’s Jay Aston, giving it Eighth Day in the opening section of this gloomy-doomy pounder. “We’ll probably lose a lot of our old fans with this single but I hope we’ll interest lots of new people,” she said upon its release. At 42 seconds, Cheryl jumps in, wrestling it back to the broad-brimmed-hat, big-coated Fizz sound, and it’s a wonderful fusion of styles. – Graham

Paul McCartney wrote a song called London Town, but went wrong in the very first line (“Walking down the sidewalk…”). No such danger here. Our fab four have got their feet planted solidly on pavements, which are being pounded by the loudest drums of the decade. Welcome to a metropolis full of “hostile faces”, howling guitars and shrieking vocals – no place for the Fizz, you’d think, yet this “rat race” is one they intend to win. “I know I’m gonna stay.” And who can blame them, when city living sounded this much fun? – Ian

Despite a barnstorming performance on The Little and Large Show, this majestic slab of glossy ’80s pop inexplicably stalled at number 57. A cautionary tale on the perils of fame (“face of the week/it was TV Times”), it was accompanied by a baffling video featuring a made-up martial art and Bobby channelling the Man from Del Monte. – Chris

With a record sleeve depicting the band fleeing an incipient wave of volcanic lava, this is Bucks Fizz strutting on the most unsubtle of soundstages. And thank goodness they are: few bands ever managed to make frenzied statements of doom (“The loneliness around you cuts like a knife!”) sound this sweet-voiced and danceable. Our heroes could be walking home from the pub or battling mythical foes in ancient lands – whatever it is, they’re in a pickle and you somehow feel better for having them share it with you. – Ian

The group had a surprisingly fecund career in TV theme tunes (let’s remember The Laughter Show and The Funny Side), but this Bobby G solo project from 1984 is the absolute ace. A melancholy muse upon losing the lot, it’s the perfect accompaniment to luckless gambler Robbie Box’s wayward journey home after a disastrous all-nighter. A journey that would end with him drinking a pint of milk, straight from the bottle. Cards in the gutter, here comes the rain. Cue Bobby: “Ah well, big deal!” – Graham

Look mum, Mike Nolan’s playing the guitar! The band might have been trying a little too hard to go legit at this point, but this remains a total banger, filled with irresistible hooks and an addictive chorus. The video is brilliant too, especially the bit where Bobby walks into a bar and sees… Bucks Fizz! – Chris

We’re reminded of that cartoon of David Byrne and Paul Simon, both laden with field-recording equipment and wearing pith helmets, bumping into each other in the African jungle. This 1986 ‘comeback’ single led the gold rush in ‘world music’ (it was released before Graceland) and, yes, it maybe seems culturally crass today. But if we can put that aside, here’s Bucks Fizz (the new iteration, it’s Shelley’s debut) soaked in reverb and Stomp-style percussion. The “We won’t take no for an answer” countermelody gives you everything great about the band. – Graham

“Big crowd at the crazy house!” This stormer from 1988 was the group’s 20th single, and the last to bother the top 50. It aches for credibility, both in its sixth former-essay lyrics (“Beneath the white fire of the moon”) and Bobby’s anguished vocal… and truly gets there. The soaring, high-drama epic was undersold by the accompanying video depicting Bobby, Mike, Cheryl and Shel appraising the ammenties of their holiday home. But it gave us all the chance to speculate who was ‘with’ who (oh, Bobby and Cheryl are linking arms!). Cher’s later version is acceptable, but a K-Tel platter by comparison. – Graham