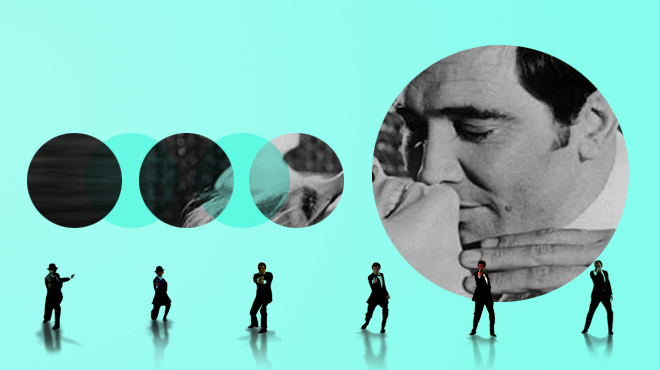 Welcome to TV Cream’s countdown of the 50 greatest moments from the James Bond films.

A word of warning at the outset. If you’ve come looking for the bit with the parachute, or the girl covered in gold paint, or anything to do with John Barry: sorry. As essential and justly-lauded as all those are, we’ve left them out. For we’re concentrating on the less iconic but equally vital moments. The ones that capture not just the spectacle but the spirit of Bond on the big screen.

We’ve also left out the two unofficial films. Not because they’re crap; far from it: both of them outrank at least three of the official ones (in entertainment value at least). No, as this is the 50th anniversary of the Broccoli/Saltzman-inaugurated, Monty Norman-hued Bond, that’s what we’ve focused on. So no room for Woody Allen and Kim Basinger – nor, for that matter, Bob Holness or Martin Jarvis.

What better way to settle the stomach after a brush with a mob of snappily-dressed hoodlums than a dairy-based deep-layered snack? Bond serves Stacey Sutton (Tanya Roberts) his speciality dish: “Voila! Quiche de cabinet!” But his host fails to fall for this poncey moniker, despite believing the amateur chef to be something of a speciality dish himself. “An omelette,” 007 grudgingly explains. Come come, Roger: the world is not an oeuf. (A View to a Kill, 1985)

“Coffee, sir?” our hero enquires when M (Bernard Lee) calls round at an indecent hour with news of some indecent behaviour at the United Nations. Bond placates his boss with a flash of an attractive Italian piece. Nope, not Madeleine Smith in a wispish negligee. We’re talking La Pavoni Europiccola, around which Bond’s entire kitchen has – rightly – been constructed. Thirty seconds of hisses, pops and continental-sounding pings later, hey presto: one cuppa. “Is that all it does?” gestures M, irascibly. (Live and Let Die, 1973)

Room service has arrived at Bond’s Portuguese oubliette – plus a bad man in a boilersuit who whacks 007 over the head. The secret agent returns the gesture, crashing a chair across his assailant’s face and then several punches. As his enemy impassively absorbs each blow, our hero is perplexed, grunting quizzically with every strike: “Hmm? Mmm?”

Thankfully, an indoor wooden balustrade (there are many in this film – some might say it stars one) saves the day, Bond pushing his foe straight through it. “Gatecrasher,” muses our man as his quarry lies motionless on the rug. “I’ll leave you to tidy up.” Sloping off, the agent makes a quick stop at the buffet trolley and drops a dollop of caviar onto a crispbread (rye another day?). Taking a bite he then murmurs approvingly: “Mmm, Royal Beluga. North of the Caspian.” (On Her Majesty’s Secret Service, 1969)

While sorting through the latest sack of 007 fan mail, M stumbles upon the plot of Bond’s next mission – and it’s one full of Eastern promise. A Soviet beauty is smitten with one of Connery’s casting photos and is ready, decoding device in tow, to be plucked from Turkey. “Girls do fall in love with pictures of film stars,” sighs M, irascibly. Bond is quick to apply reason to the situation. “But not a Russian file clerk with a file photo of a British agent… unless she’s mental!” “Hmm,” replies M – the closest the old bugalugs is willing to come to a lecture in gender politics. (From Russia With Love, 1963)

You’re stuck in the middle of something that’s gone on too far long and shows no sign of ending. A wedding reception or office party, perhaps, or maybe a flabby and self-satisfied Bond film of the mid-1960s. You wonder, with desperation, how to pep up proceedings. Then it hits you: a spot of impromptu dancing! Suddenly everything snaps into life. “You’re mad, do you know that?” cries one passer-by. “Yes, isn’t everyone?” you reply, giddily. Suddenly you’re cheek to cheek with your nemesis and a gun has been pulled. A brisk do-si-do, a pause to think up a zinger, and boom: “Do you mind if my friend sits this one out? She’s just dead!” (Thunderball, 1965)

“I’ve never been so humiliated!” barks Britain’s longest-serving minister of defence and social hob-nobber with most of the world’s top diabolical masterminds. And who can blame him. Agent 007 has just forced him to don a gas mask and parade around inside a staggeringly ornate but perfectly safe reading room occupied by a maniac who not only plays bridge but DRINKS TEA. “Your man should be taken off the assignment,” Gray (Geoffrey Keen) orders M as the three of them stroll awkwardly through Venice. M realises it’s all good-natured rubbish, while Bond realises he should probably hold off from publicly addressing his government chum as “Freddie”. At least for the next three films. (Moonraker, 1979)

Dr Kaufman has Bond in his sights. He is, in ascending order of importance, a professional assassin, a professional German and a professional gossip. All three collide in a delightful jumble of awkwardness when the Doctor is required to interrupt his killing to find out how to unlock 007’s car. “Did you call the Auto Club?” he bitches to his supervisor. “Oh, OK. Ja, I ask. This is very embarrassing. I feel like an idiot. I don’t know what to say.” Bond merely smiles. (Tomorrow Never Dies, 1997)

Giant maps: what’s not to like? Especially when they come with equally-giant Dad’s Army-esque moving arrows depicting the end of Western civilisation. But a preposterous scenario can only be taken seriously when explained by a preposterous person. Step forward, or rather swagger forward, Steven Berkoff, a man whose ego conveniently matches the size of several former Soviet republics. (Octopussy, 1983)

Having been visibly discomfited by the effort of paying a house call to Bond’s bachelor pad in Live and Let Die, it’s no wonder M reacts the way he does at having to leave his office a second time in as many films and decamp all the way to the wreck of a liner in Hong Kong harbour. Ever the loyal attendant, Q obliges with enough pointless remarks to allow M to growl with satisfying irascibility: “Oh Q, shut up,” followed for good measure a couple of minutes later with: “Oh, SHUT UP Q!” (The Man with the Golden Gun, 1974)