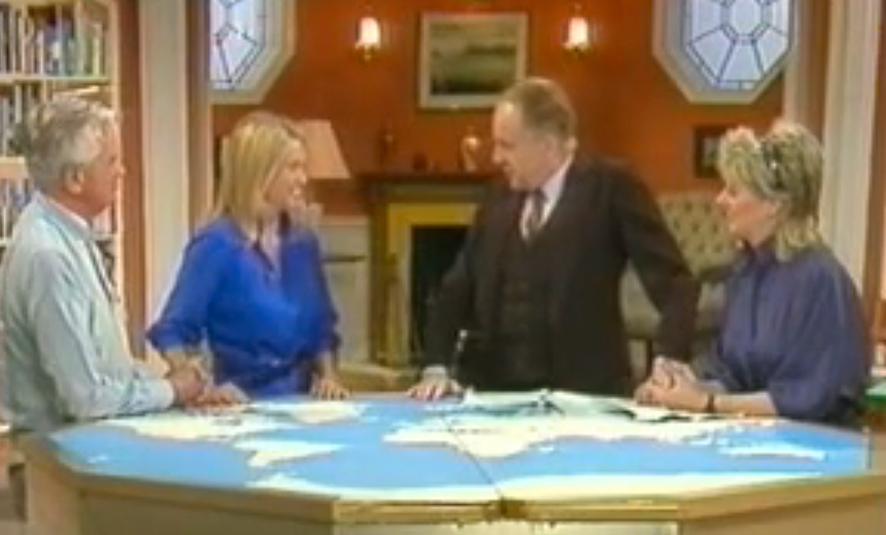 8.00pm TREASURE HUNT, CHANNEL 4
It’s Good Friday, and here’s something suitably festive – a Treasure Hunt special… with a twist! Most obviously there’s Ned Sherrin on presenting duty, welcoming some oddly familiar contestants in the shape of a Mr K Kendall (clearly “off duty” in casual shirt) and a Ms A Rice. But if Anneka’s in the studio, who’s donning the jumpsuit and up in the chopper? In fact it’s a celebrity relay with Gemma Craven, Wayne Sleep and Kenny Lynch up in the air, with added embarrassment guaranteed from the fact the studio personnel have to guess who they are. Gemma kicks things off at Teddington Lock (near the Thames Television bar, as Ned points out) and ignores everything Ken and Annie say, before Wayne gets totally lost and Kenny regrets ever agreeing to do it (“I just want to get out of this bloody helicopter!”). Still, it all ends in fine style at Limehouse Studios with the final location being Ken’s drawing room itself, where Wincey cracks open the champagne. And you can see the whole thing here!

8.00pm ODD ONE OUT, BBC1
Near the end of the run of this, Paul Daniels’ first and probably least fondly remembered in his trilogy of Beeb quizzes. If anyone remembers it now it’s surely for the theme tune, the strangest composition Ronnie Hazelhurst ever came up with, though just right for the daft titles with Paul’s “haven’t got it… nearly got it… got it!” faces. The point of the game was to, well, spot the odd one out in lists of things, and it was hardly the most dynamic of formats, but amiable enough to while away half an hour and we wouldn’t mind if a channel revived it for a thousand daytime episodes.

7.30pm FAMILY FORTUNES, ITV
Nearly the end of the run of this, too, as we’re coming to the culmination of Max Bygraves’ reign of terror, and within two month it was over, seemingly for good, before Central decided to give it another spin with Les in charge. The dynamic Les was certainly a breath of fresh air after the lumbering Max, and even the man himself admitted later he was the wrong choice for this ostensibly slick, fast-moving format, being unable to keep up with proceedings and slowing everything down to a snail’s pace. A rare misstep from the otherwise sure-footed William G Stewart in the producer’s chair.

8.45pm HARTY GOES TO MONACO, BBC2
After over a decade of chat shows on LWT, BBC2 and finally prime time BBC1, Russell gave it up in the mid-’80s, and instead embarked on this series of trilogies, running across the weekend on BBC2, visiting a European city to take in the sights and sounds and meet some interesting people; meat and drink to the great man. The faded glamour of Monaco was tailor-made for Russ, and over the weekend he’d visit the School of Dance and chat to Prince Rainier, but tonight, illustrating how he so effortlessly mixed the high and low cultures, he goes for a spin with Jackie Stewart.