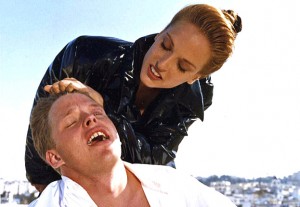 In the brave new enterprising world of 1990s British telly, deregulation-happy ITV companies gallop dizzily down the gangplank into a Europe that’s freshly open for business, with thoughts of co-productions and syndicated pan-continental franchises dancing in their heads. At the head of the queue is, perhaps surprisingly, the formerly staid Paint Along with Nancy outlet HTV, jumping into bed with various French, Spanish and Italian channels (and, er, Yorkshire) to produce this series of half hour “magical romances” with a twist, a sort of Tales of the Unexpected plus silk sheets and saxophones.

Yep, we’re talking Eurovision drama, morsels of ‘sophisticated’ loving and losing conducted in glamorous hotel apartments, swanky Mediterranean villas and crumbling stately piles, Ferrero Rocher-style overdubbed château shenanigans that had been through so many hands by the time it reached the screen they appeared to emanate from no recogniseable country at all. And they came in two flavours: erotically charged for the Canal Plus set, and tastefully shorn of illicit trappings for the UK, handily plugging a mid-afternoon gap whenever Crosswits took a sabbatical. TREVOR EVE and ROBERT VAUGHN were involved, for their sins. CHARLEY BOORMAN was involved for the money.

Plots were of the standard afternoon matinée format, aside from a few that went decidedly off the rails, for instance ‘Tall, Dark and Handsome’, which combined the ‘lonely hearts’ format with the ‘psycho ventriloquist’ chestnut, as a deranged shortarse with a wisecracking dummy sidekick plagued handsome French women with the titular patently untrue self-description. Perhaps the most memorable thing about the whole sorry enterprise was the mad cod-operatic theme tune, in which two histrionic singers duetted the translated-by-committee lyrics: “Two eyes that flash in the night! You know the vibes are just right! Fireworks explode inside you! Your head is spinning! And your heart is violinning!” There’s a Eurovision entry that would see us romp to victory.

Related Items:"We call these glitzy high quality co-productions locomotive material because they tend to drive the rest of our program catalogue along" claims a Yorkshire exec, A spangly attempt at European integration, Awkwardly overdubbed Euro business that goes on for bloody ages, Charlie Boorman, ITV getting it generally wrong aside from a few brief respites usually halfway through each decade, Nothing to do - sadly - with the European Broadcasting Union, Robert Vaughn, Trevor Eve
Share
Tweet
Share
Share
Email