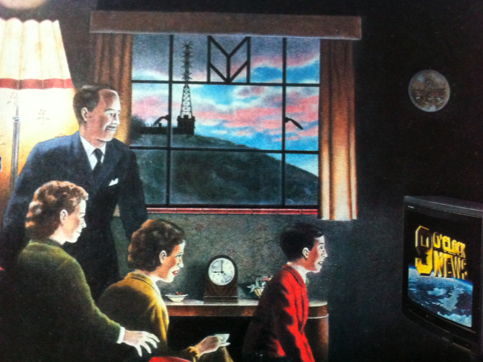 75 years ago this week, the UK’s first television service began, live and direct from Alexandra Palace in north London.

You’d be forgiven for not being aware of this grand anniversary, given how little is being made of it, not least on the box itself.

Why this week’s BBC4 schedules aren’t filled with choice archivery is beyond us. Heavens, they could even have pretended it was a trial run for when the cuts kick in.

Anyway, here at TV Cream Towers we’re not going to let this occasion pass without suitable commemoration, by which we mean A Very Long List.

Moreover they’re not THE most 75 memorable of all time, because there’s actually around 75,000 of those, and by the time we’d finished listing all them there’d have already been another 75,000 more.

We’ve also limited our choices to TV hailing solely from these shores.

So perhaps it’s best to treat the following simply as 75 reasons television is one of the greatest things in the world.

Michael Palin returning to London at the end of Around The World in 80 Days to be greeted by, among others, a foul-mouthed newspaper seller (BBC1, 1989)

John Betjeman reaching the end of the line in Metro-land and concluding “grass triumphs – and I must say, I’m rather glad” (BBC1, 1973)

Jack Regan (John Thaw) bellowing “This is going to be a right bastard” in the episode of The Sweeney ‘Thou Shalt Not Kill’ (ITV, 1975)

"I hope you've got plenty of puff!"

Kenneth Williams volunteering the information that he’s “one of the biggest puffs in the business” on All-Star Record Breakers (BBC1, 1977)

John Gordillo and dog walking out of BBC Television Centre to the sound of The Sundays’ Here’s Where The Story Ends during the very last sequence of the very last edition of The RDA (BBC Choice, 2001)

Martin Bryce (Richard Briers) having his itinerary of events for a local old people’s home hijacked by Paul Ryman (Peter Egan) in Ever Decreasing Circles (BBC1, 1984)

Tiny Clanger conducting the “music of the spheres” in The Clangers (BBC1, 1972)

Doctor Who (Tom Baker) referring to Sarah Jane Smith (Elisabeth Sladen) as “my best friend” in the adventure ‘The Seeds of Doom’ (BBC1, 1976)

Spike (Dexter Fletcher) and Lynda (Julia Sawalha) doing a slow dance to imaginary music at the end of the Press Gang episode ‘The Big Finish?’ (ITV, 1990)

Lionel Blair being Gotcha’d for Noel’s House Party during a performance of Don’t Dress For Dinner at the Bournemouth Pier Theatre (BBC1, 1992)

Millicent Martin duetting with herself on the very last That Was The Week That Was (BBC1, 1963)

Jacob Bronowski crouching in a pool at Auschwitz and scooping up a handful of mud while saying “we have to touch people” in The Ascent of Man (BBC2, 1973)

The twist at the end of the Thriller episode ‘A Coffin For The Bride’ (ITV, 1974)

Aztec Camera performing Oblivious on Pebble Mill at One (BBC1, 1983)

Sherlock Holmes (Jeremy Brett) jumping for joy off a flight of stone steps at the end of the episode ‘The Second Stain’ (ITV, 1986)

Michael Parkinson being possessed by a malevolent spirit in Ghostwatch (BBC1, 1992)

Alistair Cooke playing a burst of New Orleans jazz on the piano in his history of America (BBC2, 1972)

The Chalk Farm Salvation Army Band arriving in the studio for the Christmas editions of Blue Peter (BBC1, 1958-date)

Michael Aspel announcing the end of the world in The War Game (BBC, 1965, not broadcast until 1985)

The Prisoner (Patrick McGoohan) psychologically and literally jousting with another version of himself in the episode ‘The Schizoid Man’ (ITV, 1967)

Bruce Forsyth struggling to help a non-musical father and daughter join in with a team of professional bell-ringers on The Generation Game (BBC1, 1975)

Richard Dimbleby giving a sartorial guide to all the people working behind the scenes during Election 64 (BBC1, 1964)

Chris Evans, Zig and Zag trying and failing to demonstrate how to make the world’s quickest chocolate cake on The Big Breakfast (Channel 4, 1992)

Pet Shop Boys performing Can You Forgive Her? on Top of the Pops (BBC1, 1993)

The evil in all of us

The first appearance of the dead body of a “demon” in Quatermass and the Pit (BBC1, 1958)

Monique (Angela Richards) singing If This Is The Last Time I See You in Secret Army (BBC1, 1979)

Stephen Fry “killing” Hugh Laurie in a musical misunderstanding over the lid on jar of coffee in A Bit of Fry and Laurie (BBC2, 1990)

The Beatles performing Hey Jude on Frost on Sunday (ITV, 1968)

George Malone (Peter Kerrigan) confessing “I can’t believe that there’s no hope” in Boys from the Blackstuff (BBC2, 1982)

A “fight” breaking out among, in Des Lynam’s words, “our highly professional team” during the opening seconds of an edition of Grandstand (BBC1, 1983)

Damon Grant (Simon O’Brien) breaking down on completing his YTS only to find nobody will take him on for work in Brookside (C4, 1986)

Clive James’s Review of the 80s, culminating in our host jiving to a performance by “woman of the decade” Kylie Minogue (BBC1, 1989)

Margaret Thatcher giving her verdict on record releases, including a favourable review of Beautiful Imbalance by Thrashing Doves, on Saturday Superstore (BBC1, 1987)

Adam Carter (Rupert Penry-Jones) being blown up while driving a car bomb away from a Remembrance Sunday ceremony in Spooks (BBC1, 2008)

"Ready when you are, Ronnie!"

One half of Bucks Fizz performing Run For Your Life in Jersey while the other half performs it in London at exactly the same time on Saturday Superstore (BBC1, 1983)

The BBC screening an emergency edition of Dad’s Army when a power failure hit part of Television Centre during Euro 2000 (BBC1, 2000)

The Special AKA, along with The Beat and Elvis Costello, performing Free Nelson Mandela on The Tube (C4, 1984)

Wing Commander Marsh (Michael Bryant) feigning mental illness to be repatriated out of Colditz, but ending up genuinely insane (BBC1, 1972)

Adam Curtis saying the words “but this was a fantasy” on The Power of Nightmares (BBC2, 2004)

"We've a newsflash from the ITN"

Bob Monkhouse announcing the end of the power workers’ strike live during an edition of The Golden Shot (ITV, 1970)

Jim fixing it for a child to appear in an episode of Terry and June, accosting Terry on a cross-channel ferry concerning the smell of his Camembert cheese (BBC1, 1983)

Leonard Bernstein throwing a tantrum during recording sessions for West Side Story in an edition of Omnibus (BBC1, 1985)

Morecambe and Wise and assorted BBC faces performing There Is Nothing Like A Dame (BBC1, 1977)

Seven-year-old Nick Hitchon declaring “If I could change the world, I would change it into a diamond” on Seven Up (ITV, 1963)

Radiation-infused survivors of the nuclear holocaust depicted in Threads watching the transmission of an edition of Words and Pictures (BBC2, 1984)

Derek Griffiths singing Why Don’t You Build Yourself A Word? in Look and Read (BBC, 1982)

Angus Deayton asking teams on Have I Got News For You? to guess the missing word in the headline “I made Thatcher WHAT? boasts Lawson”, and Paul Merton replying, “It is ‘swallow’?” (BBC1, 1992)

Dennis Potter quoting the line “Will there be any stars in my crown, when the evening sun goes down?” while reminiscing about childhood hymns with Melvyn Bragg in his last ever interview on Without Walls (C4, 1994)

The opening titles of All Creatures Great and Small (BBC1, 1978)

Deirdre Barlow (Anne Kirkbride) discovering she had been the victim of con-man Phil Jennings (Tommy Boyle) in Coronation Street (ITV, 1997)

"I did a quick waltz"

The BBC’s celebrations for the 50th anniversary of television, including an entire week of archive programmes on BBC2 (1986) 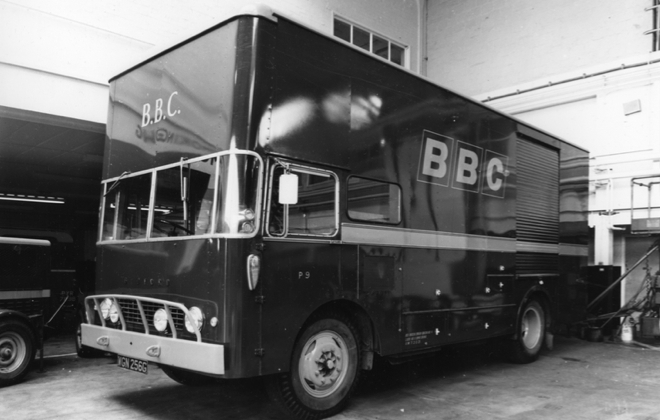 Related Items:A shiny floor, A woman pissing herself with fear in a shopping centre, BBC Television Theatre, Bellows and guffaws of the like no longer heard on mainstream television, Dusty TV archivist smugly claims "there's nothing new under the sun!" and returns to indexing eighty-seven hours of Houseparty off-airs, ITV getting it generally wrong aside from a few brief respites usually halfway through each decade, Screengrabs that admittedly aren't "all that" quality-wise but at least they're there, Split-screen fun, Television Centre, Television firsts, Television to see out the end of the working day to
Share
Tweet
Share
Share
Email