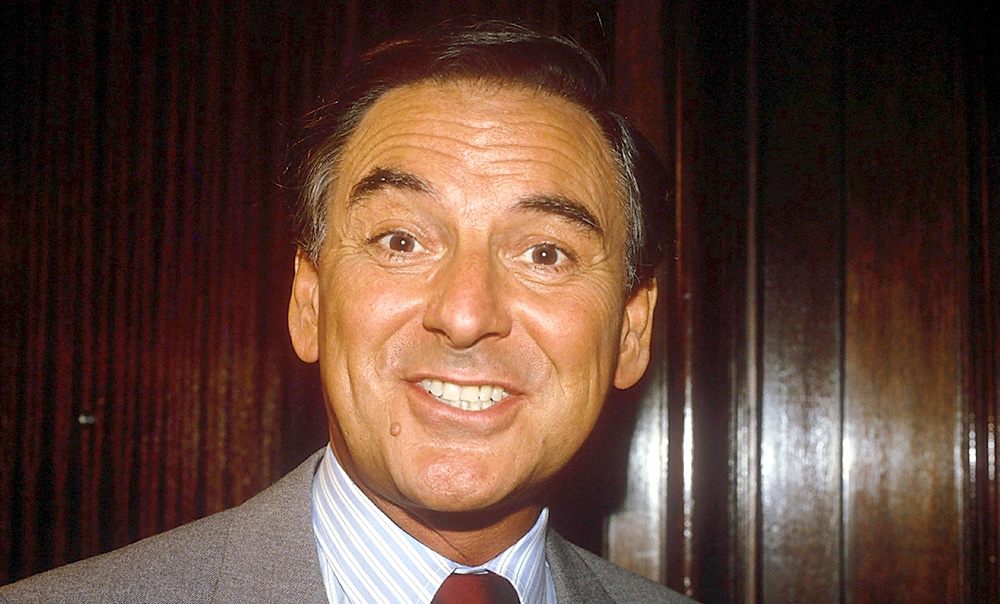 AT LAST: the first hurrah for the great Sir Bob in this A-Z. And what a performance. From inside a bizarre studio boutique, half-resembling a suburban parlour with framed portraits of comedy “greats” lining the wallpaper, our man welcomed to BBC2 those viewers bored of Panorama and World In Action on the other side. Then, after a few neat opening topical gags (“I said to my tax inspector, ‘have a heart!’; he took it”), Bob would settle back on his L-shaped sofa for interview, anecdote and cross-talk with assorted British and American comedy luminaries.

Of the Yanks, BOB HOPE was undoubtedly the prize catch, joining Bob M for a duet riffing on his theme tune (“Thanks for the memory/I’ll lay down the line, being on your show is fine!”), with SID CAESAR coming in second. JOAN RIVERS made an impact, as did similarly “waspish” veteran PHYLLIS DILLER. DOM DELUISE turned up to mug, blow and recall being sorely tempted to pinch Burt Reynolds’ arse during the Silent Movie shower scene. KELLY MONTEITH was urbanely dry as ever, RITA RUDNER was, well, Rita Rudner, and specialist comedians such as Professor Irwin Corey (the US equivalent of STANLEY UNWIN and inspiration for Bubba Bear in HELP IT’S THE HAIR BEAR BUNCH), nasal pianist PETE BARBUTTI and impressionist RICH LITTLE were oddly fascinating.

Bob created a regular spot for then-unknown US comics. STEVEN WRIGHT was an obvious hit here, as was EMO PHILLIPS. SANDRA BERNHARD and improv duo MONTEITH AND RAND didn’t translate so effortlessly, and JIM CARREY (still firmly in his “we couldn’t afford Steve Martin” phase) and VICTORIA JACKSON (who did, er, handstands) fell rather flat. Still, the occasional gem only the likes of Monkhouse would know about, such as soft-spoken radio parodists Bob Elliott and Ray Goulding, or musical whimsyologist Martin Mull (the nearest America’s likely to get to Viv Stanshall) snuck through often enough to prove this was no “book whoever’s in town” knock-off.

British comics made up the bulk of the guests, and were consequently very variable. A rare appearance for RONNIE BARKER was a draw (with plenty of ‘Gentleman’s Relish’), and Monkhouse got a lot out of VICTORIA WOOD and an ascendent MICHAEL BARRYMORE.

Some were disappointing; PETER COOK’s heart wasn’t in it that night, and other guests stuck to tried and tested routines – let’s face it, JIMMY CRICKET was hardly going to provide a wealth of comic analysis. CHARLIE DRAKE recounted that tale of him being knocked unconscious by a stageweight which shouldn’t have been left in the middle of a collapsible bookshelf on live TV again, and WARREN MITCHELL did the old “no mate, we’re having a go at YOU!” bit again.

SPIKE MILLIGAN regaled us with yet another version of that ancient “man shits self, buys trousers, changes on train, finds ladies’ pink Cashmere sweater in bag” shaggy dog story (though in this case improved somewhat with an ending wherein he actually dons the garment around his nether regions, sticking his bowler hat into the gap left by the neckhole, thus leaving him with “a sort of brown felt rupture”).

LES DAWSON did the usual piano routine, a couple of old club anecdotes, and his celebrated “facially-deformed honeymooning couple trying to blow out a candle” bit.

DENIS NORDEN and RAY ALAN were surprisingly good value, sticking to a wealth of anecdotes rather than doing a routine per se – ditto KENNY EVERETT and eternal stooge-to-the-greats LIBBY MORRIS.

PAUL DANIELS blotted his copybook by performing an extended George Formby impersonation (The Lancashire Toreador, for the record) which made PETER SELLERS’ similar turn on Parky seem the essence of brevity by comparison.

SU POLLARD recreated her first showbiz job, belting out a whimsical ditty for spot cream (“It doesn’t shrink the pimple one little bit/It brings the rest of the skin up level with it!”) A sonorous performance, to say the least.

DEREK GRIFFITHS did plenty of mime, including a fateful stint in panto miming an old woman taking her clothes off (kid in upper circle: “You’ve forgotten the bra, granny!”)

The odd musical comedy turn – Kit and the Widow, Fascinating Aida, Cosmotheka (a sort of folksy, banjo-strumming Chas ‘n’ Dave who brought their own gypsy caravan onto the stage – don’t ask) – broke up the proceedings with minimal effect.

Some acts were obviously going nowhere – while the great vent act SENOR WENCES (“S’alright?” “S’alright!”) was still going strong, RONN LUCAS and cowboy puppet Billy grated on the nerves, no matter how clear his plosives. ROY JAY in his prisoner’s uniform and “Slither! Spook!” routine was clearly on a swift path to one TV advert and sod all else. MURRAY LANGSTON, aka The Unknown Comic, wore a paper bag on his head and arsed about manically on his way to ending up as a remaindered VHS languishing at the back of Woolies. DUNCAN NORVELLE failed to get Bob to chase him.

Other nationalities included Ukranian comedy juggler YAKOV “IN SOVIET RUSSIA…” SMIRNOFF and TOMMY COOPER-esque French cock-up magician MAC RONAY. Throughout, Bob was the consummate host, genuinely fascinated by all, and though many shows sagged when the guests weren’t exactly top notch, Bob’s enthusiasm – as great for just-commissioned, soon-to-vanish impressionist KAREN KAY as for FRANKIE HOWERD – was undeniably infectious. It may have been more of a compendium of old stagers’ best bits than the in-depth comedy workshop it’s often remembered as, but for all that there’s yet to be a more enjoyable chat show on British television.