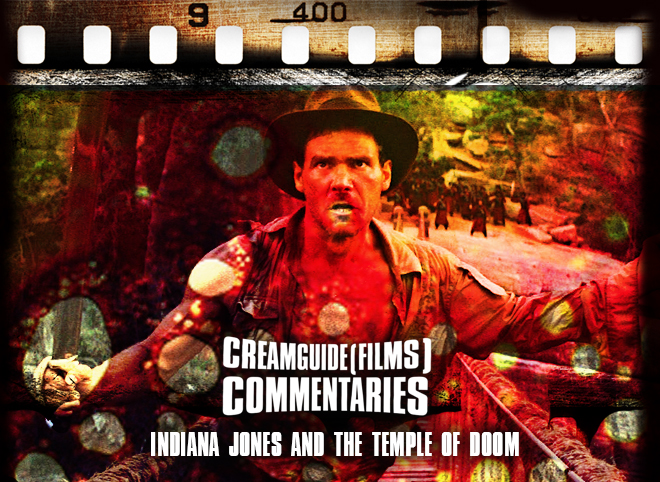 Creamguide(Films) is back! Back! BACK!

No longer confined to print – finding new ways to write different things about Day of the Jackal and The October Man – join Chris, Craig, Rose and Jack for an adventure in critical evaluation and swearing as they watch Steven Spielydrawers’ 1980s teatime classic ‘INDIANA JONES AND THE TEMPLE OF DOOM.’ Turn the commentary on just as the Paramount logo turns to the gong and enjoy as much shady Orientalism as you can handle in one sitting.

Should your browser allow, you’ll be able to listen to it above. Or download it here (it’s a little over 100meg). If you haven’t already, you could also subscribe. And this is our RSS feed

1. They married in 1991. Still married.
2. Douglas Slocombe was 71 (at time of writing he’s 102.)
3. The Chenjeh kebab is the most popular Xianjing dish in China. Traditionally made with mutton or mutton fat it is often now made with pork or chicken. But not like this.
4. The Revenge of the Pink Panther
5. Next year’s International Poultry Expo is in Atlanta. We don’t know where it was in 1935.
6. Still alive, he’s 69.
7. It was riding the elephants.
8. Apparently he practices entertainment law.
9. Willard Huyck.
10. She was a character in Prisoner: Cell Block H.
11. It’s Roshan Seth.
12. Kenneth Williams’ boss was Mr Robinson.
13. Didn’t Gillian McKeith once pretend to faint to get out of doing her night?
14. Creamguide(Films) says: The middle film is always the best of a trilogy, except for Jaws and Indiana Jones (and Terminator.)
15. And his wife was Kate Capshaw’s body double.
16. He plays a Gestapo goon in Indiana Jones and His Dad as well.
17. Amrish Puri. He died in 2005.
18. Jake Steinfeld did it this time. Dave Prowse sorted Ford out for Raiders. We read somewhere.
19. The A-Z of Cool Computer Games by Jack ‘Railton’ is still available on Amazon.
20. We recorded this back in April so that was a topical joke then.

Creamguide(Films) will return with SUPERMAN III