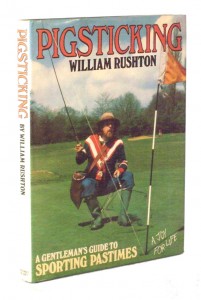 Willie Rushton, we’re sure you don’t need telling, was the man. Multi-talented in that unassuming ‘what, this old thing? Just dashed it off in between Punchlines recordings’ way, the gentleman amateur of stage and screen was just as at home pointing satirical barbs at Tory home secretaries as he was pottering about in a wood relating the exploits of Winnie the Pooh. So who better than this ebullient all-rounder to write a chummy guide to getting started in every sport ever invented?

Setting himself up as a fellow keen amateur, ‘a man who has just entered his Roaring Forties and has never been asked to play for England at anything’, Rushton takes the reader on a merry traipse round the basics of every sport from Hang-gliding to marbles, jokey summaries of the current state of competition melding with what at the time were genuinely useful, if a tad routine, info-dollops. Often the would-be sportsman is encouraged to write to governing bodies of obscure activities in gloriously twee locations – for the English Women’s Bowling Federation, write c/o ‘Devonia’, Dogthorpe Road, Peterborough.

If all this practical advice sounds a bit ‘Ron Pickering’s Stopwatch factsheet’, fear not: this is Rushton we’re talking about, and the man’s not afraid of the odd – actually, make that the frequent – bibulous after-dinner digression into rambles about Greek cricket, the films of C Aubrey Smith, and Edward Heath removing the toilet door of his yacht ‘for added speed’. And it’s laced throughout with his wonderfully Edwardian-looking pointy-footed cartoons. The whole thing reads like a long, pointless, but greatly enjoyable post-prandial clubroom chat. And Pigsticking itself? It’s the competitive pursuit of wild boar on horseback with spears, as practiced by the old colonials in Afghanistan, which sadly doesn’t have a quaintly-addressed society to whom to send your SAE.