We doff a bigger-on-the-inside-sized hat to those shows from the 1990s that weren’t Dr Who but which kind of were and which fans thought definitely were even though they weren’t.

PREMISE: With £6 million making it the biggest telly investment since BROOKSIDE things augured well for JUPITER MOON, but what we didn’t know was that the series had to make that cash stretch to seemingly quintillions of episodes. Billed as CROSSROADS in space the storylines had been worked out in advance with the assistance of the University of Birmingham’s Department of Space, although what a bunch of Brummie professors were doing commenting on whether Chantal de Grecay should get it on with Eliot Creasy or Finbow Lewis heaven knows.

DR WHO IT: Fans rejoice as 260 new episodes of Dr Who are announced. However spirits sink when it becomes clear that the whole thing is going to be set on that crappy Ice World used in the Sylvester McCoy Dr Who story Dragonfire. Roger Walker plays the Doctor with comic panache and the companion is played by that Brummie ginger head girl who appeared in Crossroads: King’s Oak. Tony Selby and Bonnie Langford return to play Glitz and Mel, who are now a husband and wife club-singing combo (although Glitz manufactures moonshine on the side). 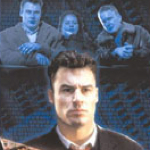 PREMISE: File under “enjoyable hokum” in your Radio Times Lexicon Pack, BUGS was a conscious throw back to the action series of the 1960s and 1970s. Featuring Jesse Birdsall, the lady from the Bill and Craig McLaugh-in, Bugs was high tech gubbins with secret agents climbing up sides of buildings whilst having nonchalant clever-clever chats, and appearances by the odd pretend heavyweight guest artiste who wasn’t really heavyweight at all (aka Charles Dance) as a knowingly over-the-top baddy.

DR WHO IT: Given that Bugs seemed to be borne from vague recollections about some episode of THE AVENGERS that the producer’s son might or might not have seen, then if it had indeed been Doctor Who we could have expected some floppy haired knob in the title role dishing out jelly beans to all and sundry, whilst making relatively dull comments about “I’m here to save the Earth… again”. Difficult not to think that someone like Richard E Grant or worse still Tim Curry would have bagged the title role. The last story of the first season would have been a Cybermen v Daleks two-parter that would have been given all the sheen of a big-budget production but without any of the expense.

TITLE: GULLIVER’S TRAVELS (and those other lavish Channel 4 and Hallmark co-production things)

PREMISE: Take an existing tale preferably set in the past, stretch it out to loads of hours, chuck tons of money at it and employ Americans to play key British characters. Actually we thought GULLIVER’S TRAVELS was pretty good really, kind of like a less naughty Terry Gilliam production.

DR WHO IT: The Doctor is an aristocrat who hobnobs with the court of French Kings called Charles. His companions are a cat that has been turned into a harlequin suit wearing man by a witch and a drippy woman played by Mary Steenburgen, who teaches both the Doctor and the cat man about things like morality and so on. The TARDIS is an old Catholic confessional box and the Doctor travels through time by moving the hands on a marine chronometer like that one in Longitude. Jeremy Irons plays Doctor Who, and John Bird and Robert Hardy play Dickens-eque accountants in an episode set on a planet that looks a bit like the film Brazil. 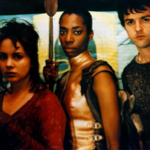 PREMISE: Comics writer Neil Gaiman attempts to bring his extraordinary vision to the small screen. And if this wasn’t challenging enough he seems to decide to make it a bit harder for himself by shooting it on video instead of film and replacing a budget with supposedly evocative characters names such as Waterloo, Tufnell Park and Wapping.

DR WHO IT: The first adventure “Doctor Who and the Seven Sisters” sees the Doctor (played by John Hannah) forced to take on fearsome underground agent to the stars – Fulham Broadway (played by Clive Mantle). The Doctor is aided on his adventure by a pretty, pale goth girl and meets lots of fantastical characters such as grown men with fake whiskers and party make-up. In the end he defeats the baddy by wrestling a goat. 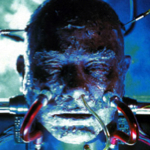 PREMISE: Science fiction written by someone who had never watched or read any, and therefore thought all his hackneyed and dated concepts were somehow original and futuristic. Lots of half-vegetable vehicles and heads somehow kept alive in fishbowls.

DR WHO IT: The Doctor (played by someone who resembles Dennis Potter) travels to the year 1,000,000 AD and teams up with a gang of rebels to overthrow a dictatorship that seems to have been suspiciously modelled on Ming the Merciless’ regime. Once the Doctor manages to navigate his way through countless corridors and passed hover cars (stopping to consume a food pill on the way) he comes face-to-face with Davros (played by someone who looks like Dennis Potter with psoriasis) and a dalek (voiced by John Birt) that mimes along to ‘Teenager In Love’.

PREMISE: Michael French and Chloe Annett solve low-level crimes committed by – in the main – comedy criminals through the use of Annett’s dad’s time machine or something. French’s role as a loveable rogue is light years from his role in EastEnders as a loveable rogue, but only in that he doesn’t have to shag Michelle Collins in this one.

DR WHO IT: An Earth bound Doctor Who (Jonathan Morris) is back working for UNIT, only this time his new boss (played by Miriam Margoyles) holds the keys to the TARDIS and only lets the Doctor use it when it is essential to the mission in hand. Cue countless tiresome scenes in which Morris is allowed to show off his comedic acting skills when trying to steal back the TARDIS keys. Each episode features a boring bit about the Blinovitch limitation effect delivered by the Doctor to his companion (played by Daniella Westbrook) whilst the two of them are hiding in a lock-up waiting that week’s criminal to show up. 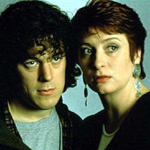 DR WHO IT: Nicholas Lyndhurst is the Doctor, and although the universe may be in great peril, all he cares about is trying to work out how the Sontaran General (Steve Frost) seemingly managed to be in two places at the same time. In a later episode the Doctor is sure that an upright toilet seat holds the key to working out how the Master (played by Hugh Laurie) managed to escape from a time vortex that had been locked from the outside.

PREMISE: Series writer Jed Mercurio claimed in 1998 that “a certain Timelord should be consigned to the dustbin” (is he talking about the Meddling Monk, Castellan or someone else? Not the Rani anyway, as we are pretty sure she is a Timelady). INVASION: EARTH was an attempt to do science fiction PROPERLY. That inevitably meant it was humourless and rather too macho. However, it was also the first post watershed BBC science fiction series since QUATERMASS. 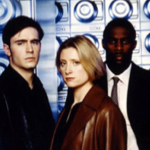 PREMISE: Rather good vampire drama (although perhaps too much moody lighting), ULTRAVIOLET was a bit like a science fiction EDGE OF DARKNESS, in that it was snappily directed and featured a government conspiracy. Just managed to pull off being a bit cool too.

DR WHO IT: Rather like what the Doctor Who production team were trying to do in the last couple of years of the original series’ run – self-consciously snappy dialogue and storylines that purposely debunk standard sci-fi stereotypes. The Doctor is played by James Nesbitt as a trench coat wearing cigarette smoking Timelord with a grudge, whilst Luisa Bradshaw-White plays his shag-around companion. In the first story the Doctor has to kill three people he likes because it makes for an emotionally dramatic story. 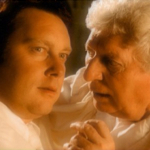 PREMISE: A drippingly post-modern attempt to turn a ropey old telefantasy series into a run around for Reeves, Mortimer and their comedy chums. Still the special effects were ace and Tom Baker didn’t look too fat in it.

DR WHO IT: Mark Williams is the Doctor, a loveable doofus who has to be led through adventures by his far more intelligent companion (played by Arabella Weir). Adventures involve a battle against the giant sofa people and the Amusingly Named Aliens of the Obligatory Named Planet Zog. Also one adventure consists of a fantasy nightmare world created by a sinister evil genius, who in the end just turns out to be an over-intelligent kid from the year 4502.