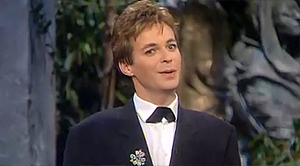 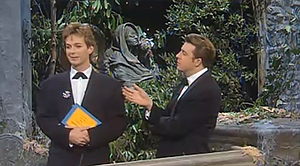 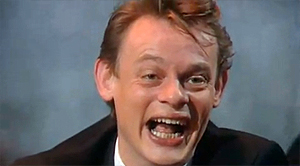 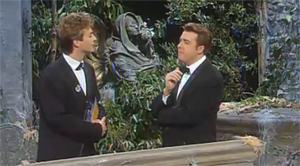 They’re still going now but the British Comedy Awards are nowhere near as exciting as they used to be, when they genuinely felt like a truly alternative awards show, subverting light entertainment with its ridiculous set and its disrespectful host, and at this point still live on pre-watershed ITV too. The 1993 shindig was happily progressing along similar lines, with lots of industry in-jokes and Jonathan Ross happily spoiling its opposition of Sports Personality of the Year by revealing the winner half an hour before the BBC did. But then things started to go a bit awry when Norman Lamont came on to present an award and was met with a shower of boos, leading Jonathan to suggest it was a show “positively dripping with irony”. Then on came Julian Clary to give out a gong and indulge in a bit of chit-chat with Jonathan. Unfortunately for all concerned, he then made an undeniably funny but extremely rude joke. Perhaps even more unfortunately for ITV, the audience exploded with laughter for a good minute or so, thereby rendering all potential apologies pretty useless. It’s kudos to Ross that he manages to keep something like a straight face during the whole thing, although the irritatingly truncated clip we’ve got here cuts off before the exchange about Julian “clawing his way through”, followed by Jonathan wondering out loud if they were still on air. They were, just, though sadly Julian’s career was never the same again and the bookings rather dried up, eventually resurfacing in some rather dull formats that never really allowed him to shine. Yet for all the outrage in the papers – albeit led by that arsehole Garry Bushell – and seemingly within ITV, everyone seemed to forget that the joke was then continued by that family friendly entertainer and primetime regular Michael Barrymore, although his career was soon to implode as well. Finally staggering to the end of the show, and before Jonathan rounded off proceedings with an off-key rendition of Have Yourself A Merry Little Christmas, the host concluded that, if nothing else, the show had given a generation of kids something to talk about in the playground the next morning. That wasn’t it from the Comedy Awards, with Spike Milligan’s “grovelling bastard” speech the following year, before someone at ITV realised what was going on and finally shoved it post-watershed, much to our chagrin. Never has a show been so joyously out of control.