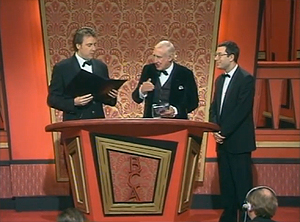 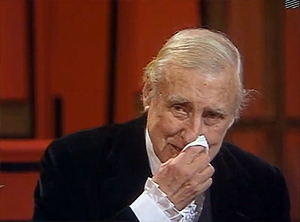 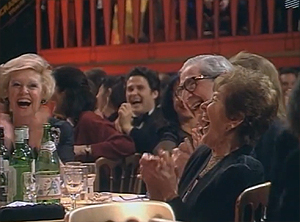 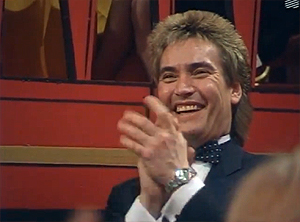 The Brit Awards always likes to hype itself up as the awards show where anything could happen, even though many of the most famous moments either happen backstage or were on the cutting room floor long before any viewer got to see them. The British Comedy Awards, though, were one of the few programmes that could genuinely live up to the “unpredictable” tag with all manner of outrageous moments broadcast live on primetime ITV. There’s another more famous moment from this event to come in this countdown but this one is fondly remembered. Spike Milligan always said that when people wrote to ask him how to get on TV he’d always write back and say he didn’t know either, so there’s perhaps some truth in his pronouncement that he wasn’t going to thank anyone because all his success was down to him and him alone. But then it’s the self-consciously serious bit where Jonathan Ross gets to read out a statement from the Prince of Wales. Moments in award ceremonies where someone has to read out someone else’s words are always pretty awkward, and so it appears here, until Spike announces after one particularly effusive bit of praise that Charles is a “grovelling bastard”. Cue huge audience applause. There was always a level of sycophancy around Spike in his later years, laughing just a bit too much at him just because of the career he’s had, but this is clearly totally genuine, contagious and relentless. It’s fascinating to see the comedic bigwigs of 1994 too, with Billy Pearce particularly enjoying it, though John Sessions seems a bit bored. Our favourite bit, though, comes after as Jonathan ploughs on with the letter and Spike suggests his complement was disappointing as some people have, apparently, been “crippled” through laughing at his comedy, and goes on to illustrate the many and varied ways in which said crippling has occurred. Jonathan wisely decides to give up the letter as a bad job, just telling Spike, “He loves you!” A relentlessly silly bit of television, this is a fabulous illustration of a man who clearly didn’t give a toss about the accepted way of doing things – indeed, that was why he was being honoured.