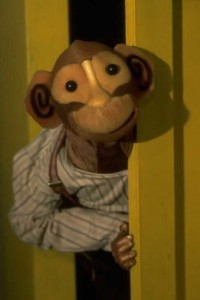 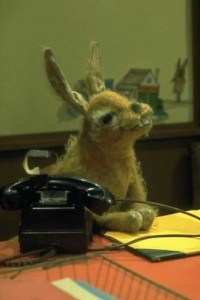 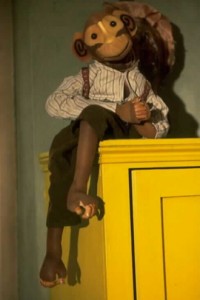 LUNCHTIME, NEW Year’s Day, 1973, and what do we find? “This is Mr. Pipkin’s workshop. Come on in and look around. See all those puppets? Well, Mr. Pipkin made them and they are rather special, for they can dance and sing just like humans. Oh yes, the chap with the saw is Johnny, Mr. Pipkin’s assistant, who has just completed his first animal, an impressive dragon. As you look around the workshop, you’ll notice many fascinating things which fit into the stories you can see during the coming weeks.” An inauspicious billing for INIGO PIPKIN (as it then was), a MICHAEL JEANS production starring good old GEORGE WOODBRIDGE, original voice of Mr Kipling’s cakes and the innkeeper in any number of Hammer Dracula films as the titular marionettesmith, and WAYNE “ACE REPORTS” LAREYA as Johnny. The theme music was a sixties-type song “It’s Inigo Pipkin, Inigo Pipkin, Inigo the puppet may-kuh. Oh-oooh!” etc.

The initial puppet cast ran to just cantankerous Hartley Hare and miserly Tortoise – the first few shows concerned themselves with the construction of cowboy-hatted monkey puppet Topov. Inigo’s nephew Fred (ROYCE MILLS) and friendly Bertha (JUMOKE DEBAYO) dropped by occasionally. Next to be made was Octavia the Ostrich, the construction of which bothered Hartley, who tried to hamper proceedings “by showing pictures of his uncle who went on a train”, but to little avail. Later the menagerie expanded to include Tortoise’s cousin Turtle and, when Tortoise fell ill, scary humanoid puppet Dr Stethoscope.

Woodbridge died in 1973, so the following year, after a programme dealing with Inigo’s death with a frankness seldom seen in children’s television, the show became merely PIPKINS, the theme changed to a jaunty kids’ chorus detailing the actions of the Pipkin Puppet Van, and slash-mouthed foamy Brummie gourmand Pig was added to the gang.

– a tour of a supermarket (puppets precariously balanced around rim of trolley and on bloke’s shoulders as elderly shoppers looked on, askance);

– The inevitable “It’s time…” tick tock tick tock “…FOR THE STORY!” pronouncement with loads of clocks on the wall.

– a loopy reconstruction of the story of the Lambton Worm, with aforementioned H. Hare continually instigating Ken Russell-style hallucinogenic deviations from prescribed plot, much to chagrin of companions;

– and the infamous “ODD MAN OUT” episode, where a series of straightforward parlour games were invariably ruined by Hartley’s Freudian obsession with a fish-slice.

Probably THE definitive seventies children’s show this side of the Atlantic, all told. NIGEL “MALCOLM” PLASKITT narrated and operated/voiced Hartley/Tortoise and Dr Steth, while HEATHER TOBIAS filled in for Pig, Topov and co. In ’81, the programme bowed out (Hartley “Next week there will be a new programme, with new people!”) in favour of Jeans’ LET’S PRETEND. Many viewers still harbour a Hartleyesque grudge about that to this day.