ONCE BOLTED firmly to the scheduling floor on Saturday afternoon, this prized presentational paddle-steamer was berthed only when it became silly to pretend a sports show could be more than the sum of its parts. Originally a good excuse for huge nuclear-powered monitor trucks to trundle round the country seeking out “today’s sport” so they could cover it “live, as it happens”. DAVID COLEMAN was the blazer-clad anchor, augmenting a meagre salary with never-bettered football commentaries on big match days. Theme tune an old-school brass and drums fanfare; titles had one of those old-fashioned multi-lensed cameras with a different sporty clip superimposed on the end of each lens. Fast-paced, ground-breaking and the place to be for “real” events…or a rag-bag of inconsequential black and white exteriors depending on your perspective. Next to don the sheepskin coat was Emperor FRANK BOUGH, a professional uncle less prone than Coleman to streams of hyperbolic consciousness. Combination of Bough-age and arrival of colour TV catalysed steady growth to a position of total dominance. No rivals to speak of (WORLD OF SPORT being a different thing entirely); this was when the world was at its grass-stained feet. 1970s line-up as reliable as Big Ben: Football Focus (Coleman again, or maybe Bob Wilson); racing from Haydock/Epsom/Chepstow/Towcester interspersed with boxing or rally-cross or the ever-so-glamorous ski-jumping from Garmisch-Partenkirchen; then depending on the season it was big cricket, or tennis or golf or rugby – either the real game with Wales beating everyone or Eddie Waring watching the “other” lot in Hull or Castleford or Wigan. Names as familiar as the format: DAVID VINE, HARRY CARPENTER, PETER O’SULLEVAN, ALAN WEEKS, BARRY DAVIES, DAN MASKELL, JOHN ARLOTT, BILL MCLAREN. Final Score rounded it all up: highlights, teleprinter, league tables, pools and peculiar vignettes from regional reporters with perfectly respectable day jobs dragged in to the studio to report on “Burnley 0 Stoke City 0”. Then Bough went a-breakfasting and unflappable anchorage duties taken on by Professor DES “DESMOND” LYNAM. Programme coasted effortlessly through the 1980s. Slowly live sport began to drift away, or rather up, to be beamed back down to those who could pay for it. Schedules became less heavyweight, more paperweight. STEVE RIDER, SUE BARKER and friends took the ropes through the 90s but by then the entire affair was regularly being ditched for extended coverage of whatever big tournament the Beeb had splashed out on that year with the name “Grandstand” scrubbed out and “Match Of The Day Live” being written in its place. Ultimately laid to rest by merciful executives to no tribute whatsoever. Bom bom, diddle-iddle-iddle. 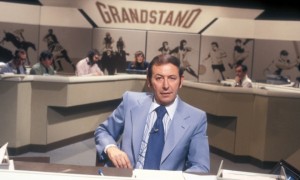