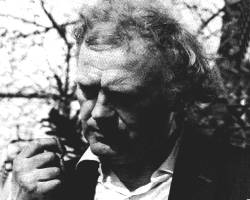 Upper-middle-class businessman Ellis Cripper (Joss Ackland) returns to his father’s country cottage, having been declared bankrupt after his John Bloom-esque package holiday company goes under. His father, a displaced Yorkshireman living in the rural retreat bought for him by Cripper (and now Cripper’s only place to go) is bluff and dismissive of his son, especially when Cripper comes out with post-breakdown, combative riddles in lieu of conversation – declaring his intention to murder his father, commit suicide, then digging up and addressing worms from the garden. His sister and brother-in-law (Peter Cellier), who live nearby, take him under their wing and put up with his awkward flights of obtuseness, and arrange a meeting with a friend of theirs, Angela (Sheila Allen), a biologist. Over a dislocated dinner conversation (with father in tow) Cripper manages to alienate his sister, and Cellier floors him with a punch. Angela, still apparently feeling some degree of sympathy, invites him back to her spacious house-cum-research lab, where a new start seems on the cards…

This is a “difficult” (perhaps self-indulgently so) play from Mercer, who is no stranger to plays about mental illness (see Wednesday Play entries In Two Minds, and the film Morgan: a Suitable Case for Treatment). What jar perhaps the most are the inserted scenes, largely in studio limbo, of Cripper’s dreams – inside a pentangle inscribed on the floor, Cripper is variously visited by his father (in posh suit and shades, and no longer speaking with his Yorkshire accent) and himself, naked, answering to the name of anyone from Aristotle to Oscar Wilde. The play begins and ends with the same scene – in Angela’s house, Cripper, within the pentangle, summons all four other characters, ostensibly to celebrate his fiftieth birthday, but all remain silent at his protestations, blow out the candles surrounding him and, in the final moments, make a grab for him.

Exactly what significance this has is unclear (Cripper stuck in a perpetual cycle of depression?) and critics took against it – Clive James accused Mercer of “double-crossing his own talent” with the “undergrad tricks” of the pentangle scenes, and it’s a compelling point – Mercer’s gift for dialogue in a realistic setting are well displayed here, with the potentially arid speech patterns of the moneyed middle aged drawn out into self-consciously baroque, elliptical verbal duels (especially the scene where Cripper challenges his GP to find something medically wrong with him) which have a firm grounding in the truth – real depressives really do talk and behave in this contrary, self-pitying, attention-seeking way. Arguably the pentangle scenes do little to add to the portrayal of Cripper’s illness – the magnitude of his willful alienation is more than adequately conveyed by Joss Ackland’s spunky backchat. The dreams, meanwhile, seem like writerly symbolism of the most obvious kind, and Mercer even hints at this artificiality in the text (Cellier: “The man dreams like a sodding film!” and to Cripper “The [bankruptcy] business has its symbolic side, wouldn’t you say?” “Digs like that just bounce off me. They’re just you pathetic way of trying to entertain yourself.”)

Perhaps this is a way of getting the whole business of Mercer, a writer writing a play about a depressive who imagines his life to be scripted and manipulated by others, to fold in on itself. (Mercer admitted that, during the seventies, he felt he’d ‘written himself out’ and the flow of ideas from his sixties heyday had all but dried up.) If so, it’s unsatisfactory. Whatever, the “real world” scenes are relishable, with a fine cast (Ackland and Allen in particular) getting the most out of some ripe exchanges of the sort that seem in danger of giving the middle-class-oriented Play for Today a good name.