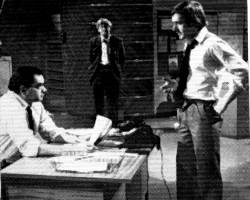 A light but well-turned satire from journalist (currently political editor for the Independent) Andy McSmith. Set mostly in the open-plan newsroom of he Gazette, a provincial daily in an unspecified North East England town, the play tracks the activities of reporters desperately scraping around for stuff to fill their rag on a painfully slow news day. Under the watchful but far from respect-commanding eye of news editor Frank Benyon, John Hansen (moustachioed, bolshy, fond of a drink), Peter Postgate (middle-aged, cynical, sleepwalking through the day) and Mary Cattell (may have a thing for Hansen, indignant at poor treatment meted out to female staff), haplessly ring round the magistrates’ court, fire brigade etc., trying to root out anything that could merit a couple of paras on page five.

Benyon doles out awful stories for them to follow up – a cherry shortage in Jersey, “are bald men less sexy?” etc. – and they grudgingly accept them with barely disguised contempt (it later emerges Kenyon was a mediocrity in his reporting days, too) and bitter sarcastic humour. Given a London-centric poverty report to follow up, Hansen scours the town for a local angle, and interviews penurious widow Mrs Baker, who graphically demonstrates her money-saving bathtime tip (fill two buckets with water from kettle, stand in front of fire with one foot in each, sponge self down).

Convinced a local poverty story is a sure-fire front pager, he returns to type up his findings, in between helping tyro hack Jimmy Gaunt tart up his desultory obscene phone call story with acres of tortuous journalese and bad punning. Returning from the pub in the evening, he finds his story has been held over (while Gaunt’s puntastic fluff is lauded with much praise), and confronts the night editor, asserting that the paper’s right-wing editorial line is the reason behind the spiking, though his principled stand quickly crumbles under the weight of his own resigned apathy, and the paper goes out as is.

As well as being a neat, straightforward “journalism in miniature” parable, what distinguishes this play is the ear for tart and embittered dialogue, and the sturdiness of the various grubby and downtrodden types that populate the newsroom. Matthew Kelly appears as a junior journo, rather unfortunately covering a scare story on paedophilia.