“Everything you could want for Christmas Night” 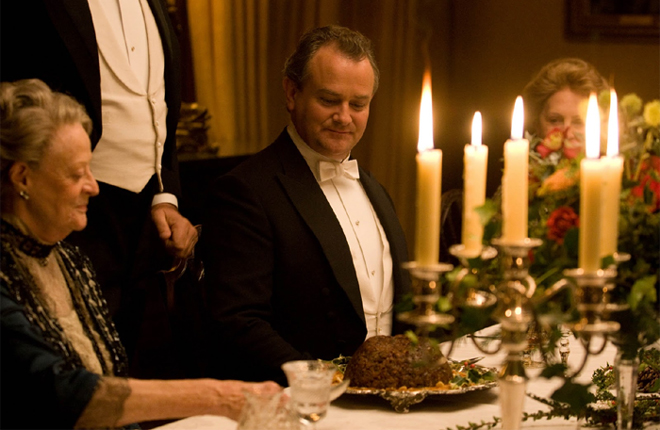 Over the past few years it’s been fairly easy to predict the ITV1 schedules for Christmas. The lack of advertising revenue on the day itself, as well as the Beeb’s traditional dominance, tends to lead to a fairly bog-standard line-up of faintly festive but otherwise unspectacular programming. Sure, the two big soaps get hour-long specials, but they’re usually accompanied by some repeated family movies, a drama that’s not quite from the top drawer and some workaday light entertainment – the likes of Stars In Their Eyes or Mr and Mrs – left to wither against rampant BBC opposition. The channel always came a distant second in the ratings but with more pressing priorities elsewhere in the year, ITV1 have never really been interested in offering anything other than token opposition on Christmas Day.

There have been occasional exceptions, though – most obviously the much trumpeted poaching of Eric and Ern in 1978, but also the much-hyped premiere of Raiders of the Lost Ark in 1984 and the bumper helping of Who Wants To Be A Millionaire at the height of its powers in 1999. Now in 2011, another A-list show was deployed as a spoiler against the offerings from Television Centre – a special edition of Downton Abbey. The period drama had enjoyed enormous ratings during the autumn, as well as huge critical acclaim, and it was obvious that a Christmas special would be a major attraction on the day itself. A shamelessly festive affair, the two-hour show was probably the toughest competition the Beeb had faced for a decade or more. In fact, it was more likely that ITV could have enjoyed higher ratings (and, all the better for their bank balance, advertising revenue) had they shown it another night, but its spot in the primest of prime slots also served as an indication that ITV were taking Christmas Day seriously this time.

The rest of the day on ITV1 was fairly solid. As usual much of the daytime as devoted to films, though at least there were some different titles to the familiar fare in the shape of March Of The Penguins, Miracle on 34th Street and Aladdin, although Happy Feet found itself in the post-Queen slot for the second time in three years. The monarch’s message this year, incidentally, was the first to produced by Sky News and this, presumably, explains why it earned a screening on Sky1 for the first time in a while.

ITV1 then went into the evening in familiar though robust fashion with You’ve Been Framed and then Emmerdale at 6pm. One change this year was that the familiar double-helping of soap was split into two, with All Star Family Fortunes slotted in at 7pm before Coronation Street. This actually turned out to be a fairly inspired move by the channel, as the evergreen quiz’s ratings increased hugely on its performance last year when it went out at 8pm, presumably helped by its hammocking between two big shows, and the earlier slot where viewers are after something undemanding as accompaniment to the turkey sandwiches, rather than later in the evening when you want something more substantial. After 11pm, ITV1 wound down with a repeat of Benidorm from a previous festive season, but overall this had been a solid Christmas Day, with a well-chosen big event and some schedule tinkering ensuring a more appealing line-up than we’d seen in previous years.

So whereas in previous years when BBC1 only had to turn up to ensure victory, how did they fare against a renewed threat? To begin with, as Christmas fell on a Sunday, there was a slightly larger amount of religion than is often the case, starting at 9am with a retelling of The Nativity, first shown during Christmas 2010, leading up to the traditional service, this year from Lichfield Cathedral, then a special Songs of Praise from the Royal Albert Hall. Suitably spiritually enriched, viewers were then able to let their hair down with Morecambe and Wise, a repeat of the film Kung Fu Panda and Top of the Pops, a line-up made all the more impressive by the non-appearance of any of the Santa Clause films.

After The Queen, unsurprisingly animated films abounded, as is BBC1’s wont, with Monsters vs Aliens and Ratatouille receiving their network TV premieres, both of which made for amiable viewing but neither were quite out of the top drawer. Then at 6.30pm was The Gruffalo’s Child, a sequel to the successful animation shown two Christmasses ago.

One notable omission from the BBC’s schedules this year was The Royle Family, which it was rumoured had been planned, but had to be aborted as Caroline Aherne and Craig Cash failed to complete a script in time. Whether there was any truth in this or not, this was the first Christmas Day since 2007 when there was only one Royal in BBC1’s schedules, back at 3pm. To fill the gap, the next three shows all appeared an hour later than the previous year, with Doctor Who at 7pm, Strictly Come Dancing at 8pm and an hour-long EastEnders at 9pm.

Perhaps oddly, despite the more favourable slot (and the seemingly weak ITV opposition), Doctor Who‘s ratings were actually lower than 12 months previously, and the same was also the case with Strictly, with the show losing out to Coronation Street in their annual festive face-off. As with last year, Strictly‘s festive edition featured a host of new celebrities taking to the floor, although it’s perhaps questionable as to the value of this format given Simon Webbe and Barry McGuigan hardly seemed any more exciting than the stars who had been appearing week in week out for the past three months. Perhaps we’ll see the Champion of Champions trophy dusted off again for next year’s Christmas Day outing.

At 9pm came the major battle as EastEnders slugged it out against Downton Abbey – and the spoils initially went to Albert Square, with the overnight ratings showing the soap was watched by 9.9 million viewers, the biggest audience of the day, while 8.6 million people opted for the commercial channel. This wasn’t Downton‘s biggest audience by any means but the win for EastEnders isn’t perhaps a huge surprise given its long-established status as Christmas Day’s top soap, and it’s highly likely many would have chosen to record the timeless Downton rather than ‘Enders (with the next episode 24 hours later). This did mean it was the first Christmas Day ever where no programme won over 10 million viewers in the overnights, although this was clearly down to greater competition than general dissatisfaction, given Downton enjoyed more than double the audience Poirot did in the same slot last year. In addition, Downton ended up being named as the top show when official ratings (including recordings) were taken into account, though EastEnders was the most watched show on the day itself.

ITV1 did take the lead during Downton‘s second hour while BBC1 did manage to rustle up some new comedy. At 10pm came the first new episode of Absolutely Fabulous since 2004. This was a series that had perhaps been more appealing to the media and the people it was parodying than the general public at large, but the new episodes – two more of which were to follow in the New Year – enjoyed good reviews and pulled in a creditable 7.4 million viewers. Then at 10.30pm came a special episode of Michael McIntyre’s Comedy Roadshow. This seemed to hark back to the episodes of They Think It’s All Over in the late 1990s in terms of their unfestive nature, though McIntyre had tried hard and interspersed the stand-up with sketches featuring familiar BBC1 comedy faces – including Miranda Hart and James Corden – and music to create more of a Christmas Night With The Stars feel. An entertaining show that worked pretty well for late night chilling out, it managed to get over six million people watching after 11pm – highly impressive, especially given BBC1 virtually called it a day at 10.30pm last year. This Yule, repeats of Have I Got News For You and Graham Norton from a few days earlier, plus a comedy film, were the post-news fillers.

One surprising entrant into the Christmas ratings war  was Channel 4, who oddly appeared to abandon the traditional self-consciously “alternative” programming of previous years in favour of light entertainment. Gordon Ramsay filled a whole four hours of the schedules from 10am inviting viewers to cook their Christmas dinner along with him, while an afternoon of Come Dine With Me and Deal Or No Deal was followed by the family films Big and Ice Age 3, then at 9pm a festive special for Alan Carr. It’s hard to see how, given the competition, this could do much better than the religion, ballet and opera that used to be a staple of C4 on Christmas Day.

BBC2 followed a more familiar path with its Yuletide centrepiece a special show featuring Darcey Bussell re-enacting her favourite dances from Hollywood musicals. Classic comedy was also on the agenda with Dad’s Army (controversially at teatime, not the 8pm slot it had filled for the last few years), Porridge and Blackadder, a series that now seems to be confined purely to Christmas Day. Battling against the big guns at 9pm with The Toys That Made Christmas, a wry look at festive fads and fashions of the past. Channel 5 were their familiar threadbare selves with a stack of TV movies and a three-hour countdown of Britain’s Favourite Christmas Songs.

It was certainly a happier Christmas for ITV1 in 2011, which illustrates how the presence of a genuinely big show in the schedules can brighten up the whole day. This increased competition, and the lack of anything really spectacular, made it a slightly disappointing day for BBC1, though it continued to enjoy the lion’s share of the audience and put together another remarkably consistent line-up. It also proves that, yet again, Christmas remains one of the most important days in the telly calendar.