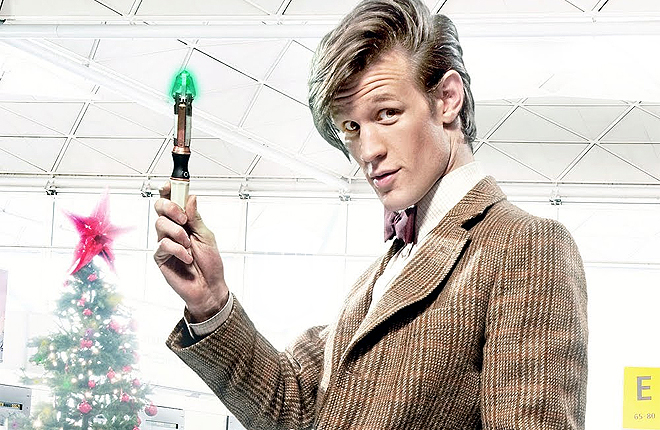 Christmas Day 2010 brought us a familiar Christmas Day line-up on BBC1. Some may argue, in fact, rather too familiar. Doctor Who, Strictly Come Dancing, EastEnders, The Royle Family? Didn’t we get all this last year? And the year before that, come to think of it?

It’s true to say that the vast majority of BBC1’s Christmas Day followed the same pattern as in previous Yules, with the same shows in the same slots. Yet apart from EastEnders, these were still fairly new festive traditions, with the most frequent visitor to the 25th being Doctor Who, back for its sixth consecutive Christmas Day. Certainly, none of the shows had enjoyed the lengthy runs that the likes of the Generation Game and Morecambe and Wise did in the ’70s – and they were fixtures that went on to become more loved and cherished with the continued presence. BBC1 stuck with the familiar fare, as it had proven hugely popular over recent Christmases – and few seemed to argue, with increased viewing figures year-on-year.

The shows themselves had rung the changes, however, starting at 6pm with a new Time Lord in Matt Smith and a new lead writer for the show in Steven Moffatt, although the impressive festive cast list continues with Michael Gambon and Katherine Jenkins joining the onscreen team. Probably the most shamelessly festive episode since its first Christmas Day outing in 2005, with just one outing this festive season (rather than two spread over the end of 2009 and the start of 2010) it was a little more upbeat and suitable for teatime viewing than last year’s end-of-an-era cliffhanger.

Then at 7pm came Strictly Come Dancing, which had enjoyed a second wind this year after the declining ratings and press derision of the 2009 series suggested the show was on its last legs. A bit of spit and polish brought audiences back to its previous heights, as did a more imaginative guest list headed, of course, by the exploits of Ann Widdecombe. This year’s Christmas show broke from the usual champions of champions formula to welcome some new contestants to the floor, who were apparently unable to commit to a full series, which allowed for some more Westminster waltzing from Vince Cable (apparently Peter Mandelson had been invited for balance, but turned it down), and this twist was enough for Strictly to beat Coronation Street in their annual duel.

EastEnders, meanwhile, was broadcast in HD for the first time, and while The Royle Family didn’t deviate from the familiar formula – not even leaving the Royle household, as usual – these special remained irregular enough for the series’ now annual appearance to remain much looked forward to.

There were new additions to the day, although both owed much to festive schedules of the past. At 5.10pm, Ronnie Corbett celebrated his 80th birthday with The One Ronnie, a one-off comedy special featuring sketches and stand-up… er, sit-down comedy. The show was devised and produced by Matt Lucas and David Walliams and featured guest appearances from the rest of the BBC comedy family – the likes of Catherine Tate, James Corden and Rob Brydon – making this star-studded special perhaps the nearest equivalent to the likes of Christmas Night With The Stars.

Lucas and Walliams also appeared in the day’s other big new show, the first instalment of their new series Come Fly With Me. There was nothing remotely festive about it, but the duo’s huge popularity invariably provided them with a Christmas gift of a slot to launch their latest vehicle, which was watched by more than 10 million people. How many would stick around for episode two a week later was a moot point but as the second highest rated programme of the day, after EastEnders, it was clearly enough of an event to confirm its value on the 25th.

Elsewhere on BBC1 little changed from the well-worn, but hugely successful, line-up of programmes wheeled out for the past decade or so. Starting with Breakfast, kids’ shows and the religious service, the only surprise would perhaps be guessing which of The Santa Clause movies would be wheeled out, and it was a first outing on the day itself (though not the first outing ever) for the third in the series. The animated film Madagascar kept things ticking over nicely until Top of the Pops, The Queen and, for the umpteenth year in succession, the premiere of an animated film, this time Shrek The Third. In the whole the big day went swimmingly, the only signs that the Beeb were perhaps more financially straitened than in previous years being a repeat of The Gruffalo at 4.30pm – almost the exact same slot as the previous year – and Come Fly With Me being followed, not by another comedy show, but a couple of film repeats in Starsky and Hutch and A Fish Called Wanda, and an early night to bed.

But in the heart of primetime, few could argue with another successful, swaggering BBC1 Christmas Day.

If BBC1 was criticised for predictability, at least they could point to the ratings. ITV1’s line-up was even more of a shameless repeat of 12 months previously, and yet again they found their average schedule greeted by average ratings. Indeed the pre-Queen films, Santa Claus: The Movie and The Polar Express, were identical to 2009, albeit the other way around, while after the word from the boss, The Grinch was unspooled yet again.

You’ve Been Framed saw ITV1 into the early evening and their familiar soap block, with Emmerdale and Coronation Street yet again receiving hour-long instalments from 6pm, although neither this year managed to beat their Beeb opposition. The cheap light entertainment show filling that thankless role as stooge to EastEnders this year was All Star Family Fortunes, the kind of show that viewers would happily sit through at teatime most days but not quite up to the primest of prime slots. Then, like last year, was a new episode of Poirot – and a big one, too, with David Suchet finally getting his hands on ‘Murder On The Orient Express’. Sadly this prestige adaptation, with its box office cast, did no better than the bog-standard episode 12 months previously, although given the series seems to be produced expressly for export and constant repeats these days, ITV probably weren’t too bothered.

BBC2’s Christmas Day line-up revolved around that immovable fixture – er, a repeat of Dad’s Army at 8pm, exactly the same slot it has occupied since 2007. As in previous years there was also Blackadder and a repeat of Top Gear, but more familiar BBC2 festive fare could be found in the Birmingham Royal Ballet’s production of Cinderella in the afternoon, a carol service from Westminster Cathedral (which meant Catherine Jenkins appeared on two channels at once) and at 9.20pm an evening of festive music in Swingin’ Christmas, presented by Michael Parkinson. Later in the evening came a repeat for the most recent episode of Miranda, which had enjoyed fantastic ratings for BBC2 in the autumn, and it’s likely she may well make a return to Christmas Day in the years to come – perhaps one channel along.

This year Channel 4 offered up something still highly unusual – live television. Throughout the 25th they made four visits to Princess Anne Hospital in Southampton to watch the activity in the maternity ward as part of One Born At Christmas. Such was the excitement of this, however, that very little effort appeared to have been made with the rest of the line-up, relying on a stack of repeats including the ancient Edward Scissorhands in primetime. Channel Five (as it was rechristened earlier in the year), meanwhile, veered wildly as usual between almost endearing – with The Remains of the Day and the premiere of Stranger Than Fiction – and utterly awful, with a three-hour countdown of the Greatest Christmas Adverts at 9pm.

2010’s Christmas Day TV offerings certainly didn’t sparkle in the way previous years have, but BBC1 have clearly found a consistent and popular line-up that continues to pull in huge audiences. And, with Strictly and Doctor Who both enjoying highly successful relaunches over the previous 12 months, it’s not hard to imagine these familiar shows enjoying massive success for many Christmases to come.