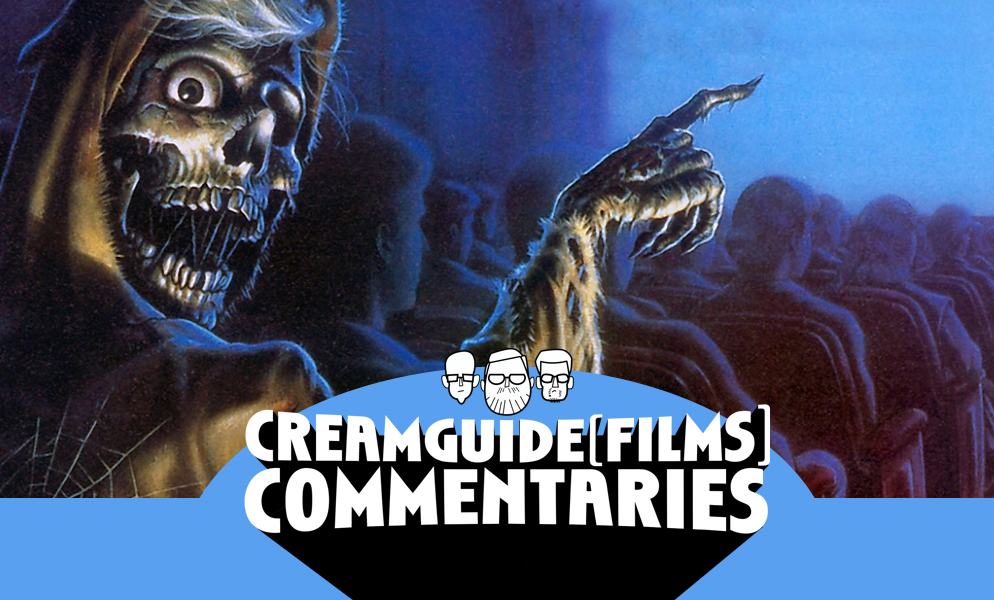 Hiya pals! It’s the second part of our 1982 scary double as Chris, Craig and Jack dive into George the Aero’s excellent portmanteau offering CREEPSHOW. Join in by arguing furiously with your near neighbours but then agree on how great Leslie Nielsen was then spend the rest of the day mothering over wilfully obscure TV shows. It’s easy! As usual, kick in as the ident moves on and enjoy. However, watch out for a Stilogean interjection near the top of the shop.  You’ll know it when you hear it.  If you don’t want to listen to it using our player (above), then download it (140 MB). Or, to save you all this hassle, just subscribe to our podcast via iTunes. And this is our RSS feed.

THIS COMMENTARY IS RATED ‘R’
CREAMGUIDE(FILMS) REVERSE FAQ:
1) Jack Kamen did the comic book in the film and the poster but we don’t know who did the intertitle illustrations. Fans?
2) Viveca Lindfors
3) It isn’t though
4) And in a Creamguide(Films) commentaries/James Joyce/Romero/King mashup, the old man comes back to life cos the nurse from Legion spills whiskey on the grave
5) Nigel Patrick we really meant
6) Which is ironic cos we can’t remember watching it
7) Quarter is ’48 and Trio is a biscuit
8) Rosanna Arquette
9) And brilliantly he had the fart machine on set for this
10) 27th December 1987. Other guests include Jon P’twee smelling of bums
11) 2010 and he was 84 having been born in 1926 in Regina in Canada and not BALDIMORE
12) We meant Joe Pilato. The only film we’ve seen Piscopo in is Wise Guys. In which he taught no one how to laugh.
13) Nigel le Vaillant. See! Twats.
14) “Dangerfield is a British drama series which focuses on the activities of small town doctor and police surgeon Paul Dangerfield, played by Nigel Le Vaillant. Six series of the programme were produced, broadcasting from 27 January 1995 until 19 November 1999.” It says here.
15) John Michie and Millicent Martin. Millicent Martin?
16) Not father and son though; judge and convict
17) Fucking look it up yourself
18) Michu Meszaros who in fact was inside the puppet. Paul Fusco who did the voice is still alive
19) Dead
20) ‘Drat’ is from W.C. Fields, non-swearing-swearing fact fans
21) Not dead
22) Vote Clinton
23) Howell Granger
24) Nigel Farrell. A Place in France. 2002
CREAMGUIDE(FILMS) COMMENTARIES will return with a cinematic disaster of Brexit proportions!