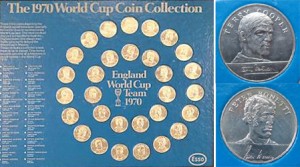 Package holidays notwithstanding, the ’70s was for most one big long decade of holidays that began and ended with mammoth five hour-plus drives from one end of Britain to the other, with breakdowns, spam sandwiches in foil on the back seat, and at least one refill on the way. Petrol stations, eying up the family traffic through their forecourts, wondered how to get the non-driving contingent, bored and queasy from petrol fumes, on side. Many little promotions sprang up over the years, from National Garages’ little model Smurf athletes for the Moscow Olympics to the mighty ‘Let’s Go to the Shop (Shell Station)’. But none can hold a candle to the original, which got it as right as could be first time round – the Esso World Cup Coin Collection.

The endeavour was, of course, a no-brainer in 1970. Cast the complete squad of defending champions in bronze – oh, all right, some kind of tin or something – and offer them free to purchasers of a full tank of the erstwhile Standard Oil’s finest two star or above. The coins were odd things indeed – depicting each player’s head three-quarters on, they gave them all the sort of heroically stern countenance normally favoured by Soviet propagandist statuary, along with rather terrifying sightless eyes, a bit like those of Marc Harrison’s weirdo alien Sky. Imposing and impressive they may have been, but going on the evidence of the coins alone, you wouldn’t want to be facing these men across the desks on A Question of Sport. Thank God Jimmy Hill was out of the game before all this kicked off.

Of course, each coin was offered sight unseen in a sealed pouch, which meant that, while collecting at the start was a breeze, the more team members you accumulated, the more likely you were to get duplicates, and the more those unfilled holes in the royal blue cardboard mount gaped with forlorn emptiness. Kids at the end of their tethers, if not their collections, were often ‘helped out’ by kindly forecourt attendants, who’d offer to break open a couple of packets and get them their longed-for Peter Bonetti to finish the job off. This kindly magnanimity was, in fact, Esso company policy – provided, of course, there was visual evidence that the child in question had already suffered the tribulations of a triple run of Emlyn Hugheses.

Inevitably, the lads’ work on the field didn’t quite match their efforts in the recording studio performing Back Home, and the fad faded out. A revival occurred, somewhat opportunistically, when the 1990 tournament brought the beautiful game back under the radar of the executive classes, and Platty and co were granted their shot at faux-silver immortality. Sadly, these didn’t have quite the forbidding power of the originals – the sculpting was more cartoony, and some of them were even smiling! Those weird sightless eyes remained, though, now looking as if they’d been gouged out in some terrifying tunnel altercation. All wrong the new lot may have been, but they did well enough, attesting to the soundness of the original idea as much as the nostalgic power of those early sets – after all, who these days sheds a tear in fond memory of the Texaco Great British Regiments promotion?