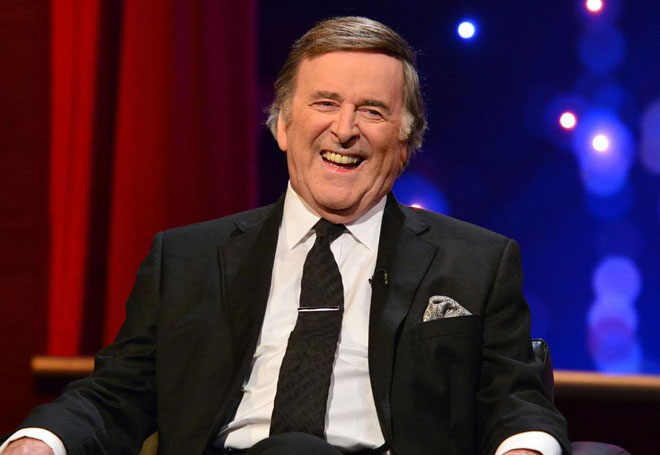 In light of the sad news, TV Cream presents some snippets from the time it sat down with the now late Lord Terrence of Woganshire. Here, dear reader, is Wogan’s ever-verdant take on a variety of subjects.

There must be at least, by now, three generations of young people who have grown-up to hate me, because they’ve been forced to listen to the show. But eventually they come around to my side because [laughing] I get so many letters from people saying, ‘My mother used to make me listen to you on the radio and I hate you, but now I’m inflicting you on my children’ – which is very rewarding.

… His style of chat

I don’t look for tough insights. I leave that to older men! I do it in the way I do the radio programme, which is in a spirit of spontaneity and fun. We’re not going to be confronting people and challenging them and demanding to know their innermost secrets. I don’t really do that kind of stuff. Old Paxman does that, and it leads to tears in the last thing I saw him do. Dear old boy.

I don’t work out what I’m going to say before I say it and I don’t have researchers telling me what to say. I’m bright enough to absorb this kind of information. If you don’t read enough newspapers, you won’t know about people anyway. I’ve always felt I’d rather bring spontaneity to things. And because I’m lazy, I don’t want to be sitting there poring over things. I’m not that much of a control freak where I want to control the production. I would never want to produce it myself.

Interviewing isn’t some archaic art. It’s a question of asking the right questions. My style is slightly tongue-in-cheek, looking for humour and trying to have a bit of a laugh. So we won’t talk too much about bird flu [laughs] or indeed the current situation in the Ukraine.

I don’t do confrontational interviews, and I don’t believe that you can. I’ve been criticised for doing interviews that are bland, but if you’re confrontational, after a month you’ll find you’ll get no guests. So – what? – you’ve got to try and be nasty to people? What’s the point of that?

That whole business used to drive me mad. Ho! The most irritating thing of all time. Of course, increasing numbers of PRs would say to the guests, ‘Touch his knee’. When I’d see a hand reaching out, a cold fear would come over me. For God’s sake, get off!

You see, one of the reasons I became a bit disenchanted with Wogan, was that the agents began to run Hollywood, and kept saying, ‘We’ll do it by satellite’. We began to do far too many by satellite. Over the last couple of years it became rife.

The old Wogan was on three days a week. I always maintained it should have been on five days a week, so I could have running gags, so that if you got somebody who was really interesting and you had to cut them short, you could say, ‘Come back on tomorrow’. But we couldn’t do that, because you only had two gaps.

I would have preferred less research and more spontaneity. It was always belts and braces. There was too much in it. Four guests in a show was ludicrous. So you’d end up with a big star and only have four minutes before you had to get the next guest on. That was an irritation that didn’t go away. But, anyway, you couldn’t do it now. You can do it if you’re Letterman, but he’s in New York, with an American audience. But they’re not going send stars over here. You’d run out of people, that’s the problem. Whereas if you do it infrequently like Michael [Parkinson] does, you can get away with it, and that’s OK. I don’t think there’s a market for it. Of course, you’ve got daytime talk shows, but they’re at a different level. They’re much more housewifey – no offence to housewives. They’re the kind of thing you want to watch in the afternoon as you [pretends to nod off].

Bill Cotton wanted to do it later in the evening, at 10pm, which is where all talk shows should be. 7pm was never a good idea. Not at all, it was too early. Do you think people are ready for talk that early in the evening?

I don’t know whether to apologise to him for that. Although that got a huge round of applause, and I suppose it was relevant at the time, maybe I shouldn’t have said that. I have a low threshold of embarrassment. I don’t want to be upsetting anybody. His beliefs are entirely his and sincerely held. Looking back, what I said was kind of a cheap shot. It didn’t do him any harm. It certainly didn’t do me any harm, but, I think it was too easy to say it. I looked at that, and, it was a comment, but maybe I should have said nothing. I think you’ve got to be kind. Why be nasty? Only kindness matters, really.

You see, that was another mistake. If they’d kept that on – I know it was expensive because they bought this place in Spain. The eejits could have shot all the interiors in a studio, rather like Neighbours – but they built this bloody place in Spain. Then they got cold feet. I suspect it could have been a success in the same way as Emmerdale if they’d left it.

I don’t put a lot into things. I don’t! I don’t! If you can do something, you can do it. I’m a great believer in the Corinthian.

… His relationship with the BBC

You don’t have a relationship with a big monolithic organisation. It is paternalistic and it’s a very fine organisation. But it’s a broadcasting organisation. They’re not my aunty. So if you’re useful to them, and you’re getting viewing figures. they love you. They’re like any other organisation, if you’re not performing, it’s goodbye Mr Chips.

… His approach to his career

No, never. I was always really lucky. When I left working in the bank, I immediately went to be a staff announcer on Irish radio, which paid approximately four times a week what I had been getting, so I was rich as Croesus. Well, I haven’t ever been that rich, but I’ve always worked and I’ve never had the insecurity of being out of work. I didn’t come up through the theatre so I’ve never known what it is to wait for the next piece of work from an agent. I think it comes down to things like my upbringing and the school I went to, because school is important. So I’ve never had that insecurity. I think most of the trouble in the world is caused by people who are insecure. Border Scots! [Laughs]. But do you know? Oh, that was cheap shot! But that’s the way it is. I’ve always felt, when I’ve come to negotiations, that I’m strong enough to walk away. If they know you’re never going to walk away, then you’re never going to win the contract – you’re never going to win any contract.

I’m not a confrontational person. You don’t want to be arrogant. Arrogant people get nowhere. But they do say to get on in our business you have to be really tough, but I don’t see myself that way. I’ve never knocked on anybody’s door to get a job. I’ve never walked over anybody. I’ve never had any idea of what I wanted to do, to be honest, so this idea of being determined to get on the radio … I drifted into it.

I’ve risked a lot in terms of career, I’ve never risked anything as far as my family is concerned, but I’ve risked a fair amount of my career. I’ve stopped doing series when I’ve felt that I’ve had enough, or I’ve lost interest. Like Auntie’s Bloomers. They’ve got no more bloomers, but Anne Robinson’s still doing it. And you think – no disrespect to her – but it’s been done. What’s his name’s still doing it? Dear old Denis Norden. He said to me, at Spike Milligan’s funeral I think it was – requiem – he said, ‘God, you’re lucky you got out of that’. [Laughs] He’s still doing it! But that’s fine, he’s good at it. But for me it’s got to feel that what you’re doing is different. That you’re bringing something that no-one else is bringing, and you’re doing it better than somebody else. Radio and television is full of people just doing it. They’re not thinking about what they’re doing, they’re not thinking, ‘Am I doing this better than anyone else? Can I do this differently? Why am I doing this? What am I doing?’ It’s mechanical, there’s no humanity in it all.

It’s surprising that I got it for services to broadcasting; they could have given it to me for services to charity. What have I brought to broadcasting? Well, I have, brought what I hope is originality, but it’s not much to get a knighthood for. I was at the investiture and I saw a fella come out, an old soldier who was getting the Queen’s Award For Bravery and I thought, ‘He deserves it’.

Oh gosh, there will be no footprints. As I always say, not many people talk about the Duke of Wellington these days, do they? Even Alexander doesn’t get a mention now.