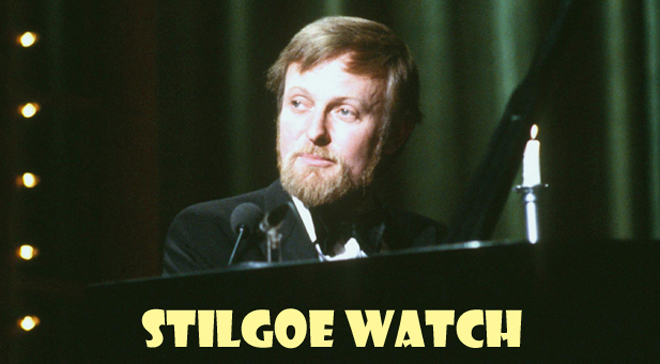 It’s been a while, but he’s back. TV Cream’s Stilgoe Watch has been reactivated after more than two years of lying dormant. The reason? Rich is currently gracing the digiwaves of BBC7 in the shape of his late-80s series Stilgoe’s Around.

At the time of writing, two episodes are available to listen again.

In the first, the sainted Stilgoe and “his team” tackle “some of the myths about money-making” (still topical, then), which begins – brilliantly – with a spoof of Instant Sunshine. The “team”, including Charles Collingwood and Belinda Lang, essay such gags as “Why is she called Mrs Gerald Terribly?” “Because she misses Gerald terribly”, do Pythonesque interruptions about sketches in progress, and trill songs about yuppies. Perfect.

In the second, Richard is joined by an over-acting Emma Thompson for a revue from Guy’s Hospital in front of some tittering nurses. Cue gags about waiting times, skeleton staff and Bupa plus some textbook Stilgoe anagrams. Richard also wonders why everybody at Grace Brothers sits on the same side of the canteen table.

So if you have a spare half hour, they really are titan howlers. Or perhaps harlots twine. Or maybe lathers in two*.

*Thanks Richard. Such arch dark hints.