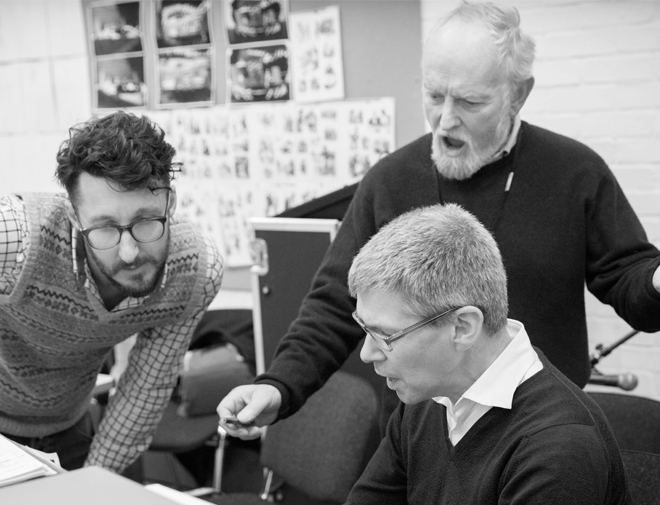 What happened to the comedy song? We don’t mean the two-a-penny pop parodies that ailing sketch shows knock out with dreary regularity, but the fully-paid-up, bowtie-wearing, whimsical ditty slotted into That’s Life! or a great big national event special. As a craft it was unfairly maligned even while it was still a going concern, and now it’s all but died out in the mainstream, we think a reappraisal is long overdue. So come with us, as we challenge the mighty titan (Miles Kington) and his troubadours (Instant Sunshine), and with a smile, we’ll take you to… THE SEVEN Cs OF WRY

As Pete Baikie pointed out, whatever the ostensible subject of a wry comedy song, the overarching message is, more often than not, a slightly self-satisfied “Clever/I’m very clever!” on the part of the singer-songwriter. Composing whimsical ditties on scientific subjects was a good wheeze for Tom Lehrer (The Elements) and Flanders and Swann (The First and Second Law of Thermodynamics – “Oh, I’m hot!/That’s because you’ve been working!/Oh, Beatles, nothing!”) to playfully show off their intellects. Stilgoe, of course, on top of his anagrammatic expertise, was a hire-a-wit par excellence, often called upon to compose an on-the-spot ode at major events, none more notable than his break-neck summary of Decision ’79, The Man Who Voted Don’t Know in the Election, a rhyming catalogue of the night’s gains and losses (“Commander Boaks got twenty votes/There were more for Hatters-ley/And Tam Dalyell did awfully well/So he can’t blame that on me!”) after which Sue Lawley marvelled “I don’t know how he manages to get his tongue round it!”

Well, you’ve got to earn a living, and what better way of keeping your oar in the public’s boat race than scoring a nice, airplay- garnering topical tune or two? It’s a grand tradition, from Flanders and Swann (“There’s a hole in my budget, dear Harold, dear Harold…”) through Cy Grant and Lance Percival’s topical calypsos for Tonight and TW3, to that man Stilgoe again. From musical musings on politics and consumer affairs on Nationwide to his own “musical satire without the nasty bits” series And Now the Good News (sample song/sketch – The Stilg as Natural History Museum attendant sings a tearful goodbye to the Tyrannosaurus skeleton – represented by a Dr Who and the Loch Ness Monster-style blue-screened glove puppet – due to be moved into storage). He even dipped a tentative toe into post- modern media analysis in the famed ‘Wide slot where he itemised the foibles of the various regions’ political interviewers, who, arranged on a bank of monitors, joined in live with their collective catchphrase – I’ll Have to Stop You There (“But Stuart Hall in Manchester, he gets the whole thing wrong/He just says “Shut up minister, you’ve gone on far too long!”)

It’s a golden rule – never use one syllable where ten will do. The very presence in a wry song of the sort of vocabulary usually given a wide berth by ‘proper’ songwriters provides – or at least ought to provide – a chuckle or two, so bizarre linguistic constructions abound. This may help contrive a tricky rhyme (Stilgoe’s Towels – “The Americans made explorations lunar/And they prayed the Russians wouldn’t get there sooner”), or create comic confusion (First and Second Law – “That you can’t pass heat from the cooler to the hotter/Try it if you like but you far better notter/’Cos the cold in the cooler will get hotter as a ruler/’Cos the hotter body’s heat will pass to the cooler”). But mostly it’s just the love of language for its own sake. Jake Thackray liberally anointed his earthy tunes with this sort of vocal relish (“Country bus, north country bus/Clumsy and cumbersome, rumbustious…”) and knew just when to drop the right word in for comic effect (a copulatory description in the excellent On Again, On Again – “Not even stopping while we go hammer and tongs towards the peak/Except maybe for a sigh and a groan and one perfunctory shriek”). Now, that’s verbal engineering of Kingdom Brunel proportions. Where’s Thackray’s Revolution in the Head, then?

Since George Formby elbowed Frank Randle out of the limelight and shoved his little banjulele in the nation’s chops, the cheeky chappie persona has been a staple of that sector of the whimsical song contingent that doesn’t hail from within the M25 or have access to a piano stool. Formby begat, by some tortuous conjugal process, Doc Cox, but never mind him, Mike Harding’s our main candidate for this category. Stripy, stripy blazer, funny face, funny face, big glasses. And, unlike Simon Fanshawe, some laughs into the bargain. OK, haunted curry house humour like the accordion-backed Ghost of the Cafe Gunga Din may not cause the shade of Noel Coward much concern, but sheer jauntiness makes up for the comparative lack of sophistication. And when he delivers the line about King’s Cross’s “street of a thousand norks” in Aussie expat picaresque She’ll Be Right, Mate… well, you’ll have to trust us that it’s with the ultimate “ooh, crikey!” expression all over his silly old face. Moving up the taste ladder, the sainted Jake Thackray wasn’t above some superbly stylish sauce. Sister Josephine detailed the life of a big burly crim hiding out in a convent (“Oh, Sister Josephine/Founder of the convent pontoon team/They’re looking through your bundles of rare magazines…”) while North Country Bus was sung with a crafty emphasis on, well, certain syllables. And Bantam Cock is a great album title. And lest we give the impression this is a purely male ballpark, there were also Fascinating Aida (and, er, Hinge and Brackett) and of course Victoria Wood, whose “beat me on the bottom with a Woman’s Weekly!” shtick may have been dulled by over-familiarity, but still, we love it.

With a small “c”, we hasten to add. While Stilgoe visibly grinned when crooning of Callaghan’s defeat, he also trilled with some relish – “One more thing to add – what was it?/Oh, the National Front lost its deposit”. Then again, any hoary old observational cliché was grist to his mill – Towels was a tower of fancy built on the ancient made-up phenomenon of Germans colonising sun-loungers, which he was still doing in the late ’80s. Similarly, a wistful air of longing for a more innocent past informed Richard Digance’s infamous Spangle-mentioning verse list of lost ephemera. And with its roots in folk and/or Noel Coward’s tinklings, the musical accompaniment of choice for all our acts is unashamedly old hat. We’ve no idea why this should be the rule, but there it is. However, if anyone knows of a whimsical Trotskyite songwriter who had a stint on The Braden Beat or some such, do let us know.

We never understood why The Simpsons writers thought the idea of a wave of topical barbershop quartets in the late ’80s was so hilarious. Over here we’d already had over a decade of Instant Sunshine, the medically-qualified purveyors of harmonious sideways looks. Even solo performers managed to double up via studio trickery. Peter Skellern’s wry lovelorn paeans often found him accompanying himself on the multitrack in a twenties crooner style, none more liltingly than on his Me and My Girl theme. But top of the tree is, yet again, Stilgoe, for his superlative performance of Statutory Right of Entry to Your Home, a song composed in honour of a Nationwide consumer unit viewer who enquired after which authorities possessed the titular trespass entitlement. Not only did Dickie act out the part of his astonished self returning home from work to find his domicile infiltrated by an ever-increasing mob of state-sponsored snoopers, he used the wonders of colour separation to impersonate each of the unwelcome governmental gatecrashers (the Customs and Excise clerk, for instance – “Where’ve you stashed the stolen jewels?/Do you take us all for fools?” – was appropriately rendered in piratical cod Cornish). Truly, this was the apotheosis of the genre. And all to placate some miserable old sod who objected to his gas meter being read. That’s value for money!

Whether in concert, in the Nationwide studio or (in Instant Sunshine’s case) on the hard shoulder of the M1, it’s the mirthful minstrel’s job to inject an atmosphere of classy bonhomie, as if a well-appointed cocktail party or cabaret evening were just getting underway. The ironic donning of the dinner jacket (The Sunshine, Stilgoe), the bowtie (Stilgoe again) or the straw boater (Sunshine, Mike Harding) was the first step. Second, jolly musical syncopation – the chirpily-strummed banjo, the hoppity squeezebox refrain, the bouncy “ba-dum-bum-bum” of The Sunshine’s double bass. Or a bit of dainty ivory tinkling, utilising the full range of the keyboard for comic effect, punctuating the gaps between each jokey line while the audience takes it in with a brisk plonk-plink, and of course, augmenting the final punch line with a showy glissando up the keyboard, ending with the right hand pertly raised above the head in a fey lampoon of the concert virtuoso. Thirdly, the vocal delivery should feel free to waver in between ‘proper’ singing and, when the comedic moment arises, a sort of staccato spoken delivery accompanied by a sly twinkle in the eye. In fact, Keith Michell went the whole hog and delivered the Captain Beaky songs – surely the very definition of whimsy – entirely in this manner, archly twisting his tongue round that final line about “a flying um-ba-rella” while the brass band backing came to a respectful halt. That’s the classic whimsical song payoff – never knowingly undersold.