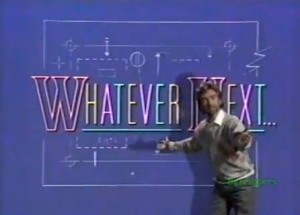 NOEL’S Blue Jam-style post-Whirly Wheelgate ‘soft launch’ reinvention with a low-key top-of-the-week start-of-the-evening game show based on… well, nobody was quite sure really. Some kind of ‘Stop The Film’ conceit based on proto-Bungalow comedy larks in public places, intermingled with… something about stuff hidden inside a wall? No, us neither. Chiefly remembered for razzle-dazzly madcap brass section theme tune antics and of-its-time title sequencage involving Noel ‘teleporting’ in and out of clips, including one where he appeared to be fleeing some bloke at high speed in a market whilst wielding a novelty oversized match. They really don’t make ’em like that any more.