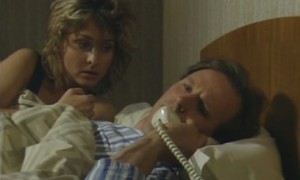 THE PERMANENTLY knackered University of Lowlands was the setting for this bracing slice of higher edutainment with PETER “COME ALONG, TEGAN” DAVIDSON as blue-eyed ingénue campus doc Stephen Daker, brightly and naively walking into a nightmarish world of self-interest and mutual exploitation, and getting the sharp end of the stick right in his pleasant, open face. Yes, once again it’s a case of ‘sick and twisted institution becomes metaphor for Thatcher’s Britain’ (see also The Old Men at the Zoo), but as this is Andrew Davies on script duties, the ‘do you see?’ symbolism seldom gets too outrageously clunky, and even when it does, it does with all the eye-rolling splendour the cast can muster.