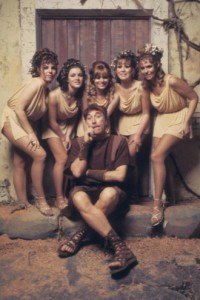 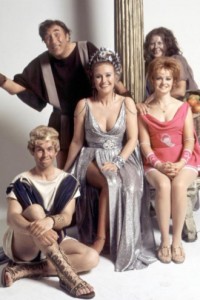 “I NEVER seem to get it!” FRANKIE HOWERD, as himself, as a camp dogsbody desperate to get to the end of “the Prologue”, sports a badly-fitting toga on a badly-fitting Ancient Rome studio set while numerous character actors mince in and out of the temples behind him. Earnest senator: “Let me fill in you on the latest positions.” Nubile wench: “Don’t worry – I already know them!”. Frankie was Lurcio, WALLAS EATON/MAX ADRIAN and MARK DIGNAM his owner Ludicrous Sextus (do you see?), ELIZABETH LARNER the owner’s wife Ammonia, KERRY GARDNER the simpering son Nausius and GEORGINA MOON/JENNIFER LONSDALE the supremely-endowed daughter. Much running about, clothes falling off, “let me put it in for you” shenanigans. Audience hooting an unoptional extra. Sequel transferred the whole thing intact to the Middle East.