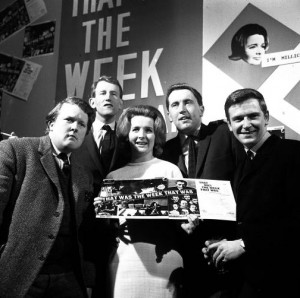 “IF THEY took sex out of this programme, there’d be nothing left!” FROST, LEVIN, KINNEAR, PERCIVAL, MARTIN, RUSHTON and COPE sit behind a giant desk with camera wires all over the place in the name of satire, in the process scandalising one half of the nation (the posh half) and bemusing the rest. Made legends out of a) Frost’s hair (a weird plastered down bowlcut with a mini-quiff at the front); b) Frost’s bad impressions; c) Milicent Martin’s ability to sing unfunny topical songs very very very fast; d) Bernard Levin verbally jousting with the upper classes; e) Timothy Birdsall drawing cartoons “live”; f) having cameras in shot; g) having cameramen in shot; h) Willie Rushton looking grumpy; i) Roy Kinnear looking frumpish; j) Ned Sherrin, by virtue of having at least ten separate credits on every programme. Went out live at the end of Saturday night BBC television, often for up to two hours at a time. “Questions” were asked in the House of Commons, of the kind nobody actually remembers hearing at the time. “Switchboards” were jammed, in a manner nobody actually remembers seeing at the time. They did a dreadfully mawkish special edition the night after JFK got shot which became a hit record in the States. Axed when the Beeb got the jitters about someone making jokes about a general election. Everyone – more or less – came back, though, for NOT SO MUCH A PROGRAMME, MORE A WAY OF LIFE.