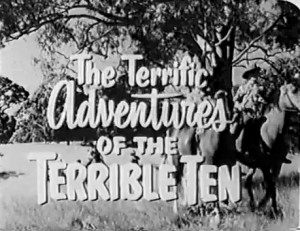 HARD-UP AUNTIE resorts to slapping on another shitty import to eat up expensive airtime on hot August mornings, when no-one will be inside watching telly anyway. Eponymous band of Oz youngsters, mixed-ages, kill time in dirty early-1900s provincial nowhere. Weekly assembly of packing-case make-believe town interrupted by occasional outbursts of excitement, such as when very large tree falls on old woman breaking her back. From the stable of ex-pat Kiwi children’s drama stalwart ROGER MIRAMS, who’d go on to give us the likes of THE MAGIC BOOMERANG and THE LOST ISLANDS, the UK showings of which inspired many a Brit kid to emulate their down under counterparts, and get the hell out of doors.