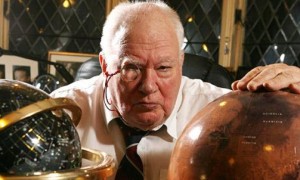 SMALL SCREEN equivalent of the Galapagos Island tortoise. Only ever been the one host, but PATRICK MOORE still makes astronomy seem both unerringly dull and annoyingly scary at the same time, even after 50 glorious years. Numerous spin-offs and specials also aired, coinciding with virtually every single development in space exploration over the past half-century, including first Moon landings (later wiped by cack-handed Beeb techies), comet sightings, eclipses, probes, shuttles, satellites etc. Still showing every month, shoved at out somewhere round 1am, to the glockenspiel galumpher’s increasing tetchiness. Recent 50th birthday edition featured special guest star BRIAN MAY inexplicably dressed up as a 150-year-old Moore.