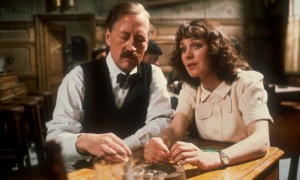 STIRRING TREMBLE-LIPPED stoicism from the Second World War, charting the ‘ALLO ‘ALLO-inspiring Belgian resistance capers of BERNARD HEPTON (Albert Foiret) running a restaurant patronized by Nazis while smuggling PoWs out of the country on the side. Unbearably tense, undeniably sentimental but unashamedly ace. JAN FRANCIS was the original resistance ring-leader before getting killed by a falling brick. CHRISTOPHER NEAME was her love interest and British agent who ultimately escaped by driving a bus, Roger Moore-style, very fast towards Switzerland. ANGELA RICHARDS was the angelic-voiced chanteuse and Foiret’s bit on the side, forever irking his bedridden cantankerous missus. CLIFFORD ROSE peered down his nose at all and sundry, failing to ever guess what was going on behind his Beef Wellington, while MICHAEL CULVER almost worked it out before shooting himself and future Demon Headmaster TERRENCE HARDIMAN guessed it but just as the war ended. STEPHEN YARDLEY showed up as a treacherous piano player (always the worst kind), RON PEMBER was the ever-loyal wireless man Alain, and VALENTINE DYALL the superb, non-ruffled Dr Keldermans. Rose resurfaced in KESSLER, wherein his eponymous evil bastard was trying to stay anonymous in some South American banana republic. Opening tracking shot down stills of railway lines, canals, roads and winding tracks set to sombre theme music the epitome of the perfect title sequence.