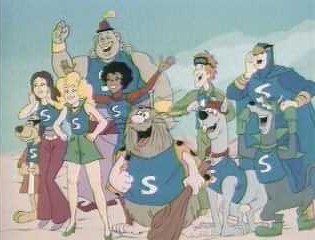 Wacky Races-like setup saw the teams compete in a different outlandish event each week, from zany long jump-variants to lunar-bound rocket races, with plaudits doled out to the winners seemingly on an everybody-forget-about-it-by-next-week basis. Usual form was for The Really Rottens to almost win via subterfuge but blow it through own inherent ‘rotten’-ness at the last minute, though even they did score a couple of middle-of-plinth moments. Overall smackage of merchandising bonanza oddly counterbalanced by lack of much in the way of merchandise, and more than likely to have been a big influence on that similarly Dread Baron-equipped one where Yogi Bear took millions of characters off for a ride in Howard Hughes’ aeroplane. This is not necessarily a positive thing.

Originally seen in the US as part of a schedule-straddling package with Captain Caveman & The Teen Angels, Dynomutt & The Blue Falcon and that dimly-recalled ‘meet the Doo folks’ recollection-fogging Scooby Doo revival. Over here it was split into four – with Laff-A-Lympics enjoying a stint as Swap Shop’s resident star animation – thereby ensuring Hanna-Barbera Saturday morning dominance for several years to come.