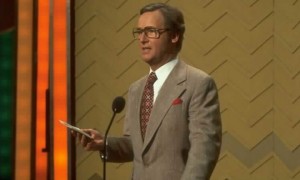 IT CAME from Norwich. Some called it the Quiz of The Week (especially announcer JOHN BENSON, later poached by Jonathan Ross). NICHOLAS PARSONS was the salesman-presenter. This orgy of pre-THE PRICE IS RIGHT consumerist caprice began on Saturday 19th February at 6.05pm thusly: “Quickfire quizmaster Nicholas Parsons poses questions worth £1, £3 and £5 which earn the contestants the right to bargains worth up to £1,000 in any one show – provided they know the right answers. If you can’t resist a bargain, then this is the show for you. This week’s lucky trio of contestants are Mrs. Pat Beaver, a play group supervisor from Salisbury, Wilts.; Bob Bennett, a stock controller from Sudbury, Suffolk, and John Hayes, a schoolteacher rom Allesley, Coventry. And the major prizes they could win are a £1,000 sports car offered at just £95; a £333 colour television set at £30; a £720 continental bedroom suite at £70, and a fortnight’s family holiday in Cyprus, worth £560, at £55. Some sale!” Musical interludes (“we’re having a heatwaaaaave!”) didn’t help to up the level of sophistication; your man at the organ, PETER FENN.