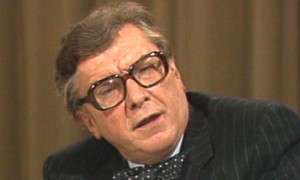 UNCOUTH VERSION of Radio 4’s Any Questions, only with pictures. Invented to stop ROBIN DAY moaning about how the BBC weren’t giving him any work, and to fill a hole in the schedules when the BBC Governors nixed the idea of Parky going five nights a week (and thank fuck they did). Early editions had Sir Robin hunched over a beige desk flanked on either side by two captains of industry/trade union leaders. Well-spoken audience members in frocks and suits read “questions” off cards about collective bargaining. Nobody watched. Then some politicos started turning up, figuring it was a chance for a bit of after-hours ego-exercise, and more than a dozen people realised the show existed. Sir Robin ruled it like a personal fiefdom until 1989, when he quit (in a huff, naturally) to be replaced by multi-trillionaire signing PETER “Er…” SISSONS, who was useless and was soon replaced by DAVID DIMBLEBY. Latterday policy of having a) celebrities b) competition-winning students and c) Eddie Izzard on the panel likely to have Sir Robin spinning in his humble spear-carrier grave.