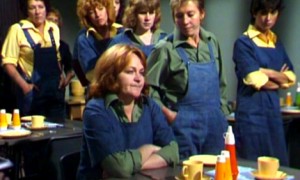 ROTTEN PANTOMIMESQUE female lag epic, beneficiary of a dreadful “cult” following amongst people who should know better. No prison cliché was left unexplored, no potential for sordid melodrama left unrealised. Boss Cocky of the incarcerated femmes of the fictional Wentworth Detention Centre was Bea Smith (VAL LEHMAN), a queasy cross between a ginger-hued Miss Piggy and an Antipodean Anna Magnani, gaoled for double murder and rightfully deserving the title of “top dog”. Bea’s teenage daughter had died from a heroin overdose, prompting much decidedly dodgy “Just Say No” moralising amongst the ensemble of killers, thieves, thugs etc. Many of the most popular characters came from the early years, such as drunken old hag Lizzie Burdsworth (SHEILA FLORANCE), inserted for proto-COCOON “you’re as old as you feel” factor, yo-yo knickered cockarnee sparra Chrissie Latham (AMANDA MUGGLETON) and Judy Bryant (BETTY – ho ho – BOBBIT), token lesbian with a pacemaker powered heart of gold. The officers or “screws” were chiefly represented by genteel governor Erica Davidson (PATSY KING), hair piled into an elaborate Sybil Fawlty meringue and blissfully unaware she is administering a teeming mound of corruption; and sadistic warder Joan “The Freak” Ferguson (MAGGIE KIRKPATRICK), enforcing her will with her black-gloved fists and taking her cut on everything that happens. CROSSROADS, WITHIN THESE WALLS, St. Trinians and THE ROCKY HORROR SHOW all rolled into one and bunged out over here in the only slot it deserved: the back of fucking beyond.